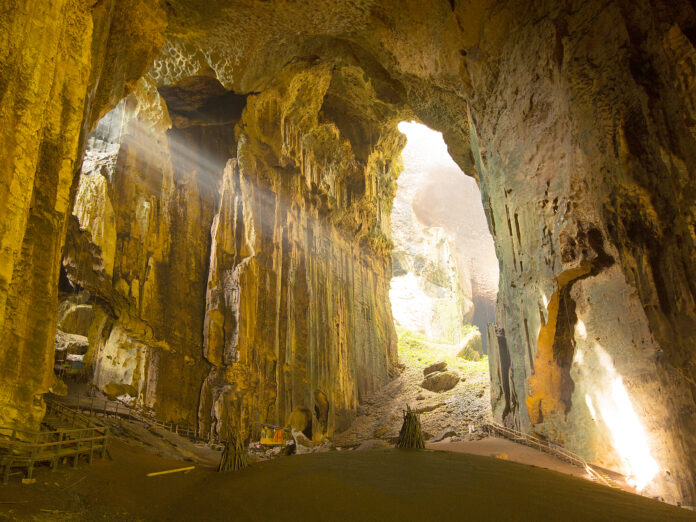 An unwavering rise in temperatures has fuelled the evolution of microbial communities in cave environments, proving to pose an ominous threat to humans and the surrounding local ecosystems.

Climate change had bred multiple disastrous natural events over the years and continues to push the Earth to a breaking point. It comes as no surprise that climate change has given rise to another bizarre phenomenon – fungi and emerging infectious fungal diseases contaminating the caves of Sabah.

The biodiversity of Sabah is incredibly vast and continues to be discovered. Alongside mountainous terrains, the natural landscapes are also home to several cave systems that remain unexplored, and close to no research has been conducted on these magnificently-captivating structures.

A study in 2019 revealed that caves are yet another victim of the disastrous throes of climate change. Rising temperatures have fostered a dangerous environment for the growth of modified species of fungi that are considered lethal to humans. So how did these lethal fungi come about? Caves are generally sheltered from natural sunlight, specifically the deeper parts where light is scarce. The lack of sunlight that reaches the depths of these caves produces a dark, cool, humid, and nutrient-lacking atmosphere. These conditions are ideal for the unsupervised growth of various fungi and other organisms.

Fungi are some of the most dominant organisms in caves due to the increased level of spore dissemination, their capability to live among other species, and their tolerance to almost the entire spectrum of pH levels.

It is estimated that only 3–8% of the fungi in caves have been discovered and that a significant majority of the present fungi are yet to be identified. Over 1,000 species of fungi have been recorded in caves around the globe, most of which are Ascomycota (sac fungi), followed by Basidiomycota (larger fungi), and lastly, Zygomycota (found in soil, decomposed animals, or terrestrial habitats) at lower rates. In fact, Basidiomycota can be further expanded to include mushrooms, puffballs, stinkhorns, certain yeasts, and jelly.

“It is estimated that only 3–8% of the fungi in caves have been discovered and that a significant share of the present fungi is yet to be identified.”

Fungi found in caves are isolated from many substrates and reservoirs, including sediment, wall, speleothem, guano, water, air, and various fauna. Non-native fungal species and organic material may be introduced into the cave via water movement in and out of the caves as well as vertical filtration of rainwater from the soil above the cave itself. Wet surfaces are also less conducive for fungal spore dispersal in caves compared to dry periods due to the differences in surface adhesion. The moist nature, stable temperatures, and abundance of nutrients in bat guano make it one of the most dominant fungal substrates in caves, as it can serve as its own micro-ecosystem.

The warm and humid climates of Indonesia, particularly Sabah, have given rise to unfavourable mycoses. In essence, mycoses is typically a disease that is caused when a fungus invades the tissues. This disease is steadily but worryingly becoming one of the greatest threats to wildlife over the world.

Histoplasmosis is a potentially deadly mammalian disease caused by Histoplasma and is common in soil enriched with bat or bird droppings. This disease in particular is recorded within Malaysian cave environments, and more so in Sabah. The pathogenic fungi are able to invade and infect a wide range of animals and plants and can be further dispersed into other regions and infect other populations.

Madai Cave in Sabah is one such cave that displays the fungi phenomenon. The caves’ entrance sits beside a small local village belonging to the Idahan people. Once you step foot in the large opening, you are greeted by two main chambers of the cave. While the first chamber is at ground level, the second chamber is a hike up a limestone hill and right past a burial site with no known identity. The cave is popular for bird harvesting activities, the swiftlets in particular.

Swiftlets are in high demand during the Chinese New Year festivities as the Chinese communities are known for their popular bird’s nest soup. The local Idahan villagers do not consume this delicacy but export them to consumers in Hong Kong and Singapore.

Fungi play important roles in most ecosystems they inhabit, mainly due to their role as decomposers, solely responsible for carbon cycling. In caves like Madai, microbes also act as a source of food for the many invertebrates, including spiders and worms, and can also turn into parasites for uninvited cave insects. Malaysia, especially Sabah, has a strong ecotourism industry and with the looming environmental limitations rooted in worldwide climate change, tourists and researchers should be aware and educated on the potential risks these emerging cave fungi and diseases pose to humans. Currently, Madai Cave is closed to the public and it is advised that visitors do not travel up.

Fret not as there are many other majestic caves that are safe for tourists to visit around Sabah such as Gomantong Cave and the Batu Tulug Caves in the Kinabatangan District.

How to get to Sabah

Sabah is well-connected domestically and internationally. The main gateway to Sabah is the Kota Kinabalu International Airport (BKI) situated about 20 minutes away from the city. Visitors can visit the glorious caves in the Kinabatangan district, which is a six-hour trip from BKI.