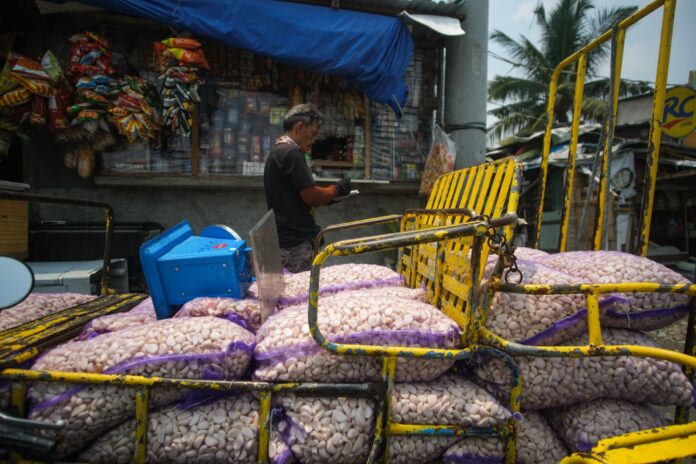 MANILA, Philippines – The pungent scent of garlic lingers in Marites Arendain’s calloused palms all day. She’s had “garlic hands” for years, from hand-peeling kilograms of garlic which are then distributed to markets and large fast-food chains.

This job pays her $1.67 for the sack of garlic she is able to peel each day, a very small fraction of the city’s minimum wage ($10.68), only enough to buy her family of eight a kilo of rice and some dried fish.

“Peeling garlic the whole day burns my hands, especially when the garlic is fresh or thick,” she said.

There is a robust demand for garlic, a basic ingredient in Filipino cuisine, from small restaurants and large fast-food chains in Manila, the Philippine capital. Baseco, a poor community near the Manila port, is where a lot of that garlic is peeled before it ends up in the boxed meals sold by popular fast-food chains, in tinned corned beef manufactured by leading food companies, or in the fancy dishes of luxury hotels.

Arendain is one of the hundreds of mothers in Baseco who are part of the shadow garlic economy. For mothers like her, home-based work, despite the long hours and meager income, allows them to care for children while also making some money to put food on the table.

Arendain works inside her home where she stands in knee-deep floodwaters during heavy rains. “I get up at 2 am to submerge the garlic in drums filled with water to soften the cloves while preparing my small sari-sari (convenience) store,” she said.

She spends the rest of the morning holding a clove of garlic on her left hand and a flimsy cutter on her right. It takes her 8 hours to peel a 15-kilogram sack of garlic; typically a few hours in the morning, afternoon, and evening that she can squeeze in between other chores. “By noon, I start arranging the newly delivered sack, while doing household chores. I sleep at 11 PM because I still have to watch over my kids,” she said.

Most of Baseco’s residents are migrant workers from the provinces who sought better-paying jobs in the capital.

They live in makeshift shelters covered by thin, iron sheets that provide little protection from the rain and wind during typhoon season. In summer, these homes, which are packed close to each other, often provide tinder for fires that regularly raze the community.

Baseco’s proximity to the port, where garlic shipments land, made it a convenient hub for garlic distributors. The exact number of peelers is not known but a former distributor estimated that garlic peeling takes place in 10 of Baseco’s 39 blocks, with around 20 families from each block involved in peeling. Arendain initially wanted to work at a restaurant or a department store where the pay is higher and the working conditions are better, but her husband, a construction worker who lives on job sites, discouraged her from working because nobody would take care of their six children.

Her husband makes the minimum wage of $11 a day, and that along with her income barely suffices. In 2018, the government put the poverty threshold—what a family of five needs to provide for the basics including food, shelter, transportation, and clothing—at $208 a month. But Ibon Foundation, an independent think-tank, estimated the family living wage at more than double the poverty threshold and said a family must earn $499 per month to survive. The couple’s total monthly income only amounts to two-thirds of that.

“I let my kids sleep until noon, I don’t wake them up in the morning because we can’t afford to buy breakfast,” Arendain said.

Most of the garlic in the Philippines is imported from China, the world’s largest garlic producer. Much of that garlic is smuggled into the country.

A 2014 report from the Inquirer cited estimates, based on figures from the United Nations Comtrade, that more than half of the Chinese garlic that makes it to the Philippines is smuggled.

The Philippines was 100% self-sufficient in garlic until the 1990s. But the influx of cheap Chinese imports has decimated local garlic production. “According to 2016 data, China is the top producing country with the highest yield of 26.79 mt/ha. In comparison, the Philippines’ yield was 2.82 mt/ha. Filipino farmers are far from being competitive in terms of cost competitiveness and productivity,” said the Department of Agriculture. A garlic distributor in Baseco who asked not to be named said that they rarely buy local garlic since prices reach up to $6.00 per kilogram. “Local garlic smells and tastes better, but they can’t compete with China’s prices, which are sold at $2.5 per kilogram,” he said.

The garlic the Baseco women peel ends up with wholesalers at the night market in Divisoria, where it is bought by public markets and restaurants, the distributor said. He explained that large companies procure tons of garlic from third-party suppliers or concessionaires who in turn get their supply from small distributors like him who subcontract the garlic peeling to the Baseco women.

Jollibee, the country’s largest fast-food chain, famous for its burgers and fried chicken, gets its garlic from third-party suppliers, said a former employee in the company’s supply chain department. “It’s up to the supplier whether they will hire someone else to peel it,” she said.

Increasing informal work due to lack of rural development

“I was a landless sweet potato farmer in Masbate, earning $1.5 a day for clearing hectares of lands of my neighbors using a knife,” Arendain recounted.

Her family left their village in southern Luzon, the largest of the Philippine islands, in search of better opportunities in the capital. But job options were limited so they, like the other Baseco families, became workers in the informal sector.

Home-based workers like Arendain should be covered by the labor code, but the little to non-governance of this sector means it is largely unregulated and in the shadows of the formal economy.

According to the Department of Labor and Employment, 2020 data says that out of the 39.4 million employed Filipinos, 13.6 million are informal workers.

Protection for workers belonging to the informal economy

Senator Risa Hontiveros is one of those behind a proposed Magna Carta of Workers in the Informal Economy, which would have the government keep track of the shadow economy and make sure informal workers are protected.

“They are not yet well represented in the old medium-term Philippine development plans, and for them to be counted, we would start in appealing them in the database. Because how could we plan for sectors who are rendered invisible if there are gaps in the data?” Hontiveros told the Friedrich Naumann Foundation.

For the garlic peelers, the passing of the bill, which has been stuck in a congressional committee since 2019,  could mean better chances to secure a living wage and equal remuneration.

Rosario Guzman, the executive editor of Ibon Foundation, said that there was already a growing number of informal workers even before the pandemic, and argued for long-term solutions to address the issue.

“The increasing numbers of informal workers is telling of a deep-seated problem of an economy that can’t create meaningful jobs or jobs that produce products or basic commodities,” she said, adding that a long-term solution could be a shift from a service-oriented economy to an economy that prioritizes agriculture and manufacturing.

“Life was more peaceful in Masbate, water was clean and free, and I had a better home, but we couldn’t imagine our future there, as we had no land to call our own,” recalled Arendain.

“I barely even had tools to plow the field. It was difficult to earn money, but if only we could support our life back then, then I think we wouldn’t even need to find odd jobs in the city.”

While garlic peelers l can organize to demand just wages, for now, Arendain is grateful to earn while taking care of her children.

She recognizes the value of her work and thinks that she deserves to earn more, but she says that alone and constrained by responsibilities at home, she could only do so much to earn for the next day.

Still, like other garlic peelers in Baseco, Arendain hopes to earn better in the future, but for now, she will continue to peel.

Disclaimer: This story was supported with funding and training by the Friedrich Naumann Foundation for Freedom. It was first published by the South China Morning Post. (LINK) To read more about the different cultures of abuse in other parts of the world, check out Asian Geographic Magazine Issue 4/2021 coming to the shelves soon, or reserve your copy by emailing marketing@asiangeo.com.