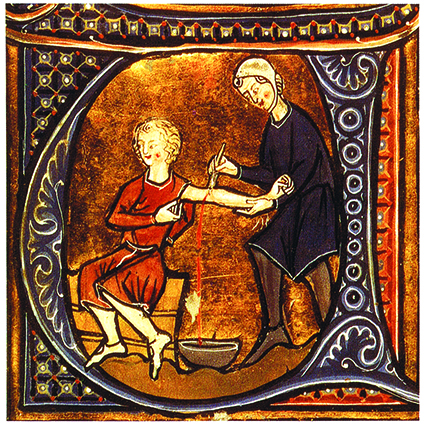 Leeches, lobotomies and magic mercury potions: the earliest medicines from both ends of the globe

This traditional Chinese therapy was believed to cleanse the body of trapped waste and bring fresh blood flow to sore and stiff muscles. Practitioners of the massage technique press and rub
a smooth bone, coin, or stone across a patient’s oiled body in long strokes. Still popular today in many Asian countries, the treatment causes the body to erupt in bruises from the breaking of numerous capillaries.

Apothecaries in medieval Europe often concocted strange medicines using odd ingredients to heal various ailments. A skin infection treatment might consist of fermented crushed onions, garlic, bull’s gall, and wine, while complaints of a bloated stomach might be met with a mixture of wine, cumin, and anise. Surprisingly, some  of these creations actually worked – thanks to the antibiotic or disinfecting properties of their ingredients.

In their pursuit of immortality, some Chinese emperors had their imperial alchemists attempt to concoct the elixir of life. Many of these mixtures contained mercury and arsenic, toxic chemicals that claimed the lives of these rulers. Ancient Hindu scriptures also mention the use of rasasindura (a mercury compound) in herbal and milk products. It was thought to boost immunity, but often led to mercury poisoning.

The ancient Greeks believed that sickness was caused by excess blood in the body. As a cure, doctors would cut different parts of the body and drain out a specific volume of blood to tackle different illnesses. The technique was used throughout the Western world until around 1890, and even today, bloodletting is still used to improve conditions like hemochromatosis by getting rid of the excess iron in the blood.

Ancient Chinese philosopher Lao Tzu first described breathing techniques as a way to stimulate qi, the “vital energy” underpinning traditional Chinese medicine and martial arts. The beliefis that this “life force” flowsaround the body, and illnesses are caused when the flow is blocked. Healers use a variety of techniques to restore balance, regenerate depleted qi, and flush out disease-causing qi.

The ancient Egyptians were thought to have pioneered the use of non-poisonous leeches in medicine, but the practice was widespread across Ancient Greece and Ancient Rome to cure anything from headaches to grievous wounds. Physicians collected the leeches during the rainy season, when they were abundant, kept them in jars of fresh water, and fed them powdered dried fish or frogs.

Related: The Himalayan Parasite Worth More Than Gold

Considered one of the oldest medical therapies, moxibustion was used in ancient China, Japan, and Korea, and consisted of burning dried mugwort on special points of the body. In some cases, the herb was burnt just enough to heat the skin, while in others it was left long enough to cause second-degree burns! Practitioners believe that it stimulates the circulation of blood and qi.

This cure for mental disorders was invented by a Portuguese neurologist, António Egas Moniz, in 1935, and became wildly popular in Europe and America during the 1940s. Also known as lobotomy, it involved removing the front portion of a patient’s brain, and apparently improved their condition! In reality, the procedure often resulted in serious impairments or death, and thankfully, it was abandoned by the 1970s.

Related: In the Market for Medicine 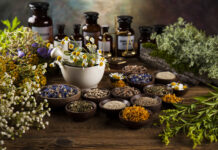