The Philippine Archipelago offers its visitors numerous extreme sports in the air, sea and on land: hang-gliding and skydiving, scuba diving and sail boating, sandboarding and dirt bike rides. But the most popular activity in the country is hiking on various levels, promising spectacular scenery and exciting meetings with the local culture.

I arrived at northern Luzon following a night ride from the capital, Manila. Of the 7,107 islands in the Philippines, this is the largest and most populated, yet even here there are enormous tracts of sparsely populated land that constitute a true paradise for trekkers. The bus stopped at the central station in Banaue in the early morning hours. I equipped myself with some food and water and set out on a 10-hour hike into the Cordilleras Mountains.

At the outset, the trail was traversable eolianite rock. As I delved deeper into the landscape, the sounds of the city abated behindme, and the trail narrowed – I was soon enveloped in the wild beauty of Nature. At times the trail climbed steeply up the mountain and sometimes, it descended and meandered into the ravine. The rain that had fallen over the previous days left the ground slippery and my decision to wear high, waterproof hiking shoes was vindicated.

For me, the trail was a great excuse to use my new Swiss army knife that I had bought before the trip. I whittled the tip of a dry branch and fashioned it into a staff. Before long, I became addicted to the quietude of Nature, broken only by the birdcalls and the gurgling streams. In the afternoon hours, I keenly felt the physical and mental exhaustion. The heavy backpack made walking difficult and the trail began climbing, as if to test my last reserves of stamina. Finally, when I reached a high point where the sky touched the rice terraces characteristic of this area, I came face to face with Dimangan, the local harvest deity worshipped by the Ifugao tribe. My being was flooded with a profound sense of satisfaction.

Many archaeological findings indicate that the Ifugao had been carving out terraces in the steep mountainsides for more than 2,000 years. Using unique techniques, passed down through the generations, they carefully carve the face of the mountain and create agricultural plots in harmony with the natural environment.

In the days following my arrival at the village, I walked among the humble huts and spoke to the residents, learning about their lives. I was glad to see that, along with evident signs of modernity, the people still clung to their traditions. As I was making my way gingerly down the rock paths, I met a group of women who were preparing to return home at the close of a gruelling day’s
work. When they noticed me, they stopped what they were doing and smiled at me graciously. The sight of the women working together reminded me what cooperation, kindness and mutual respect are, values that at times seem to have been displaced in Western culture.

My next destination in the Philippines was the island of Bohol. After a short internal flight, I landed in Tagbilaran airport, the portal to the island. Upon arrival, I was met by Randall, an experienced motorcyclist whom I had prearranged to accompany me during my sojourn on the island. As the motorcycle galloped down the asphalt road, the scenery shifted rapidly: one moment we were surrounded by green rice paddies and the next, we found ourselves in a dense forest. Before long, the skies darkened, a gale picked up and large raindrops splattered the road. Randall decided not to continue and stopped the motorcycle at the entrance to a farm; a sign overhead read, “The Philippines Tarsier Foundation”.

Before my trip I had read about this tiny endangered mammal, which was hardly seen in the wild anymore. The foundation has established a large, densely tangled enclosure, which simulated the tarsier’s natural habitat, allowing visitors to see it. During most of the daylight hours, the tarsier is drowsy, but during its nocturnal activity hunting insects, lizards, bats and snakes, its eyes widen to a diameter of 16 millimetres and it becomes a keen and extremely agile hunter.

Once the rain stopped, we resumed our ride and before long, reached the famed Chocolate Hills, a natural phenomenon unique to the area. A strenuous climb up a steep stairway led us to a vantage point from which one of the most dramatic and surreal vistas I had ever seen unfolded before me – sprawling verdant hills lit by individual rays of sun that penetrated the cloud cover.

Geologists investigating the phenomenon surmise that the combination of chalk stratum sitting atop dense clay interacted with the rainwater to form in the relatively limited area of 50 square kilometres crammed with an astounding 1,776 peaks, ranging in height from 50 to 120 metres. At the end of the dry season, the green hills turn brown, hence the name “Chocolate Hills”.

Another extreme sport available in the Philippines is scaling one of the country’s 37 volcanoes, 18 of which are still active. After returning to Manila, I set out on a trek in the volcanically active region of Taal, which is situated at the heart of a large lake south of the capital and contains 47 locations of volcanic activity. When I arrived at the town of Talisay, I rented a driver and a motorboat, and I was soon speeding towards the volcano, the warm waters of the lake spraying in all directions.

The local residents maintain a love-hate relationship with the mountain, but generally treat it with a healthy measure of respect. Since the Spanish started tracking its activity in 1565, there have been 33 eruptions on record, the most significant one being in 1911 wherein 1,134 died. Due to the present increased volcanic activity, the Philippine Institute for Volcanology and Seismology (PHIVOLCS) recommended that the government not allow permanent residence in the area because of the constant threat and declared the entire island an imminent danger zone.

Upon arrival at the foot of the mountain, I began climbing up the steep path. For me, it was the first experience of climbing up a volcano and I didn’t really know what to expect; maybe this is why my breath was taken away when I saw the maw of the volcano. In the centre of the verdant crater there was a pool of turquoise water and occasionally a soft hiss could be heard followed immediately by an eruption of steam. In 1991, renewed volcanic activity was registered with the emergence of cracks in the rock and formation of boiling mud pits and geysers. This led to the assumption that the mountain would erupt again soon and the entire island was declared by the international association for volcanology one of the 16 most dangerous volcanoes of the decade.

Nearby, a group of Spanish mountain climbers sat engaged in lively conversation. As I approached, they invited me to join them. “With water boiling at 120 degrees one can cook a complete meal in a few minutes,” declared one of them and in so saying offered me hard-boiled eggs, which he drew from a smoking aperture in the rock while imitating the hissing sound of the volcano.

As the sun began to set, I hurried back to the boat, and on our return journey, I glanced back at the diminishing mountain, wondering when its simmering anger would once again boil over…

For more stories and photos, check out Asian Geographic Issue 114. 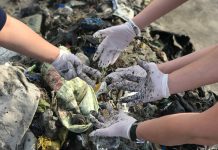 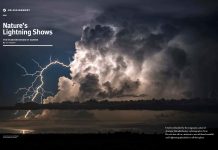 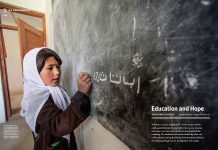 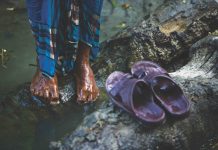 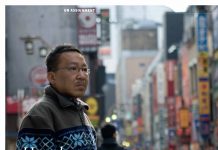 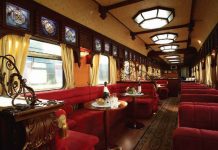