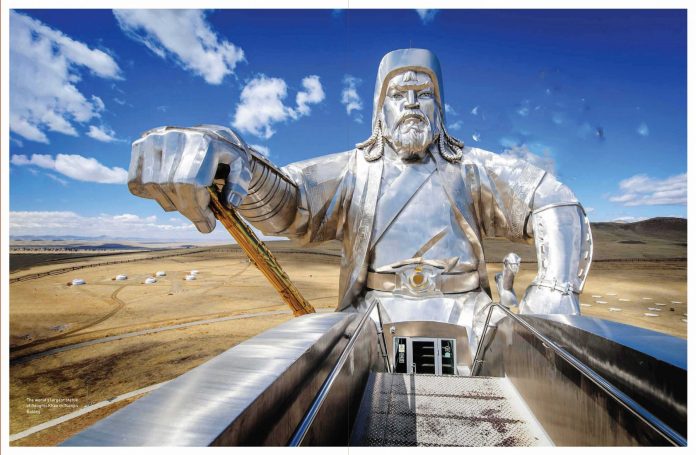 A short drive from Ulaanbaatar city centre, this national park is considered one of Mongolia’s most scenic areas. It is a popular picnic spot for locals in Ulaanbaatar, but one can also go there for horse-riding, trekking, rafting or even cross-country skiing during winter. A portion of the park has been developed for tourists, where many amenities are available.

Also known as Chinggis Square or Genghis Khan Square, this is where Damdin Sukhbaatar declared Mongolia’s independence from China in 1921. The square is dotted by statues of national leaders, with the centerpiece of a grand monument of Sukhbaatar riding a horse. The square is flanked by points of interest like the Palace of Culture and National History Museum.

There is nothing illegal about this place, despite its nickname
of “the Black Market”. It is the go-to place for cheap traditional clothes, carpets and accessories, as well as other Mongolian essentials like saddles and furniture. This market is worth a visit for an unparalleled cultural experience, but don’t forget to haggle.

Despite its unassuming outer appearance, this museum is a
gem that brings visitors through Mongolia’s history from the Neolithic era up till today. Some interesting exhibits include animal sculptures from the Stone Age, silverwork of minority Mongol tribes and 12th-century battle armour. Opening hours vary with the seasons, so do check before dropping by

Built between 1904 and 1908 by Bogd Khan, a spiritual head
of Tibetan Buddhism in Mongolia, this complex of five temples was dedicated to his brother and state oracle Choijin Lama Luvsankhaidav. The main temple displays sacred texts, religious paintings and sculptures.

FLIGHT INFORMATION:
All international flights arrive at the Chinggis Khaan International Airport, which sits 18km southwest of Ulaanbaatar’s downtown bustle. A flight from Singapore would arrive via Beijing on Air China, taking just under 10 hours. Alternate routes include stopovers in Hong Kong and Seoul. To get to Ulaanbaatar’s city centre, a taxi trip should cost about ₮40 000, or US$20.

Check out the rest of this article in Asian Geographic No.119 Issue 4/2016 here or download a digital copy here