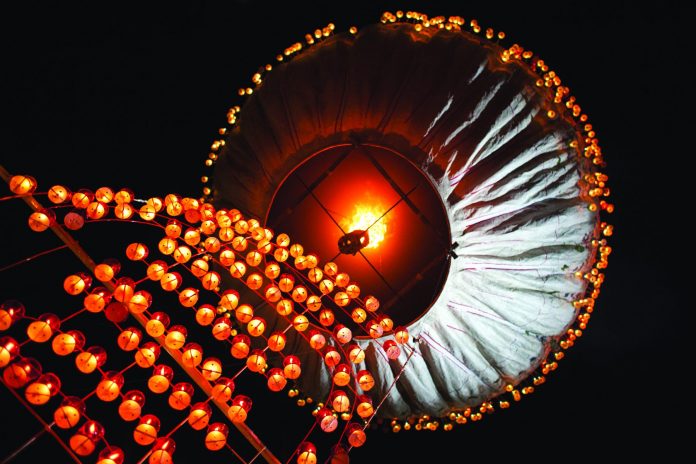 With exploding fireworks showering crowds in sparks and sometimes flame, the Taunggyi Fire Balloon Festival is not for the faint-hearted!

The massive paper hot-air balloon, adorned with traditional Myanmar imagery and carrying a hundred kilograms of explosives was supposed to ascend into the heavens and fill the night’s sky with dazzling light. Instead, it exploded nine metres above our heads, unleashing a blizzard of blue and white and red fireballs into a field of 10,000 people.

Hundreds fled. Others laughed and cheered. I just stood there, mesmerised, until someone grabbed my arm and told me (if my translation was correct!) to “run like hell”.

The malfunctioning fireworks-bearing balloon was not the first to explode prematurely that night, nor would it be the last. A few minutes later, everyone was back in the grounds, having taken the opportunity to fetch a fresh beer or skewer of meat.

This festival is held around the full moon of Tazaungmon, marking the end of the rainy season; it is also sometimes referred to as the Tazaungdaing Festival of Lights. The tradition of hot-air balloon competitions was inspired by the British in the late 19th century.

Other than the Taunggyi Balloon Festival, which is held in late autumn to celebrate the end of kathein, there is little else in the way of tourist appeal in Taunggyi, a sleepy hill station in northeastern Myanmar.

During this week-long event, the daytime sky swarms with giant paper birds, cows, dogs, dinosaurs and other animals. At dusk, the meesaya – the “fire masters” – march in a parade to the ceremonial launching ground to fill the night with dazzling pyrotechnic displays and radiant airborne murals composed of thousands of tiny candles.

Of all the festival’s airborne delights, the meegyi (fireworks balloons), which carry homemade rockets on bamboo cages, are the most popular – and they are also the most difficult to create. Teams of fire masters spend much of the year designing and building their balloon, using generations-old secrets to mix gunpowder, weave complex fuse systems, and paint flame-resistant paper with images of lotus blossoms, temples, angels, or the Buddha. If all goes well, the unmanned apparatuses will rise to around 120 metres before launching a half-hour fireworks display, earning the winning team glory (and a cash prize).

But it does not always go well, as U Than Zaw, Taunggyi’s self-declared top fire master with more than 40 years’ experience in launching balloons, explains. A balloon might fire early, bathing the crowd in flame; a stray mortar might ignite the paper; the kerosene burner might go out; the balloon could become over-full and burst; the bamboo basket might catch fire, combusting a half-hour’s worth of fireworks into one great supernova.

But for U Khin Maung Chit (who also claims to be the top fire master in Taunggyi), the biggest disaster comes when a balloon’s fireworks fail to ignite at all, and the team must watch their work drift silently, gloomily, into the darkness. “That’s what really crushes you – when you do all that work and you don’t even get to see it,” he says. “It’s better when it burns and crashes.”

That the balloons crash above thousands – sometimes tens of thousands – of fans doesn’t seem to bother Khin Maung Chit. There are a few injuries each year, but he insists that the competition is (more or less) safe, with emergency crews standing by. The community of fire masters holds itself responsible for following the rules and regulations.

Than Zaw also appears to be unfazed, despite the fact that his last home burned down after his stored fireworks ignited and set fire to it. Moreover, one of his four sons suffered burns to his face and head while launching a balloon for the family team. For Than Zaw, the danger is half the fun. “It is no different than the running of the bulls in Spain,” he says. “People have a deep longing to be close to peril. It makes them feel alive.”

Taunggyi native Dr Aye Aye Aung, an anthropologist at Yangon University who has studied the festival tradition, does not buy into the fire master mystique with the same devil-may-care enthusiasm. She describes a culture of machismo that pushes fire masters to pour vast sums of money into one-upping each other with bigger – and riskier – displays.

The balloons have a weight limit, but teams are beginning to abandon traditional techniques, and are turning to high-tech imported compounds to get more bang for their kilogram. “There is not a limit to what they will do,” says Aye Aye Aung.

The festival, which began in the 1950s, was not always extravagant. Aye Aye Aung recalls her family launching their own modest lantern from the town square as an offering to the heavenly Sularmani Pagoda. Together, the town would fill the sky with small, beautiful lights. Today’s event features more than 100 large fire balloons each year, and the launching ground has been moved three times in the last decade to accommodate the growing crowd and merchant tents, carnival rides, concert stages and party pavilions erected by the country’s biggest brands.

Our traditions are more important than money

Things seemed to reach a breaking point in 2014, when unusually windy weather led to the highest balloon crash rate yet. Twelve people were hospitalised and four people died, including two fire masters, who sustained severe burns while hoisting an exploding fireworks cage off a tent full of spectators.

Related: Kazakhstan: Diamond in the Rough

Related: Games of the Great Khan

There have been no balloon-related deaths since then, possibly due to new safety measures, including stricter enforcement of firework weight limits and a wooden fence to keep the throngs of people from swarming the balloon teams.

Than Zaw’s wife, Daw Wai Wai Thaung, regrets the fence. “I love to stand as close as I can and then run away from the fireworks. That’s my favourite part,” she shares.

And in one moment, with nothing but a waist-high picket fence between me and a hail of fire, I could see what she meant. Why else would 10,000 people huddle under giant balloons firing mortars in every direction but up? It appears that standing in the way of danger has become an inextricable part of this tradition, making it one that should be given a wide berth by the faint-hearted.

For more stories and photographs from this issue, see Asian Geographic Issue 128, 2017