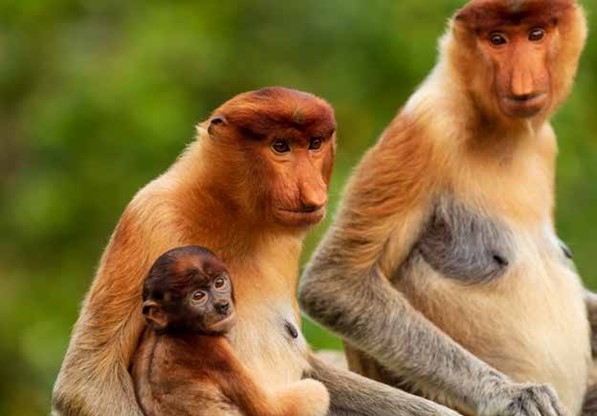 With 222 species of mammals, 420 bird species and 15,000 types of plants, the forest of Borneo is almost twice as old as the Amazon Rainforest and has hosted an almost incomprehensible number of animal species for more than 130 million years. For the vast majority of that time, human presence has been minimal, with only small indigenous tribes that coexisted with the native animals and paid their respects to the forests. However, with the onset of industrialisation and modernisation, the geographical landscape of Borneo
has been irreversibly changed. Just over the last five decades, Borneo’s human population has doubled to around 19 million people and the island has seen rapid development in the form of high-rise apartments, five-star hotels and shopping malls shaping its largest cities. As time goes on, urban areas are only growing, and even in rural areas, populations are swelling. Inevitably, something must give to make room for this growing human presence. As the population balloons, man-made structures are steadily eating away at Borneo’s forests. In the 1930, roughly three-quarters of the island was forested. Today, that figure has been reduced to half, a loss of some 187,000 square kilometres of forest.

This level of rainforest reduction spells disaster for Borneo’s biodiversity, with the threat of
extinction looming large. There are a number of reasons why Borneo’s rainforests have been suffering in recent decades, and they all stem from the activities and population growth of humans. As increased numbers of people have taken up residence on the island, there has been a significant growth in land clearance for housing and infrastructure. The main material used for such construction is wood, which has prompted mass logging. In more recent times, such uncontrolled logging has been prohibited. However, given the size of the area concerned, regulation remains sparse and ineffective.

The prevalence of illegal logging continues, with some communities collecting timber from anywhere possible and selling it to collectors for profit. Due to the high demand for timber and the poor economic development in the more rural parts of Borneo, the money earned from logging is too big a draw for these communities to give up.

But timber isn’t just used in the local building industry; Borneo is a huge exporter of tropical wood. Today, around half the world’s annual tropical timber acquisition comes from Borneo. It is evident that despite laws designed to protect the forests, logging remains a pressing threat.

Malaysia was the first country to produce sustainable palm oil, more than a century ago. Unfortunately while more than 9o percent of Malaysian palm oil is now certified sustainable, the country’s strict and imperative environmental regulations have not yet been accepted and implemented by the other Bornean nations. Malaysia’s leadership is vocal about imploring other nations to follow its lead to preserve the rainforests. After logging takes place in the other countries, the stripped land is then used for pulp, rubber, as well as palm oil plantations. Palm oil is one of the most versatile, affordable, and widely-used vegetable oils on the market. Available for harvesting all year round with trees that produce more fruit per hectare than other commonly used plant oil sources like sunflower, grapeseed or soy, palm oil seems made for mass production. Palm oil is now a USD42.8-billion global industry and is projected to reach a value of around USD57.2 billion by 2026. To continue reading and support against Climate Change, check out Asian Geographic Magazine Issue 6/2021 coming to the shelves soon, or reserve your copy by emailing marketing@asiangeo.com.