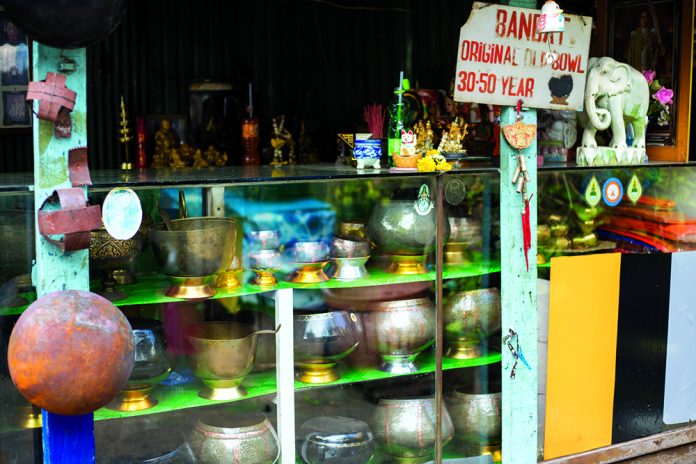 Loud clanging sometimes sounds out amid the twisting alleyways near Bangkok’s Golden Mountain temple. Here, hidden in a side street, lies the famous Ban Baat, the last community of craftsmen making but one thing from morning to night: bowls.

These aren’t just any bowls. They’re baat, alms bowls which local monks use to collect food offerings every morning, and they’re carefully created by families up to six generations into the trade with practically the same method and tools: metal, a hammer, and some good old elbow grease.

Yet these craftsmen – often Thai Chinese – are slowly being swallowed up by Bangkok’s rapidly expanding metropolis. After centuries in the area, the small community, once created by King Rama I to preserve the baat tradition, is being threatened by cheaper versions churned out from factories. Today, only a few families whose careers revolve around the dying craft are left.

Baat crafting isn’t a complicated process, but it is tedious and requires a fair amount of endurance, says Prachum Ekamol, a 70-year-old craftsman who has been making the bowl for over 50 years. He patiently points out the benefits of a handmade product: Well-rounded edges protect the monks, who have to carry the bowl for long hours; this cannot be achieved by machines. When the bowl is tapped, it produces a pleasant ringing sound, clear like a bell, unlike the dull chimes from those off a production line. And it has a shinier finish.

To keep the shrinking practice alive, the community is taking desperate measures. One of the oldest artisans, Nuan, 71, has begun making bowls again despite years of retirement due to bad health and failing strength. Having been in the business for 63 years, she can’t bear to give up her Chinese heritage.

Since arriving on Thai shores in the 17th century, Chinese immigrants have assimilated with local Thai in a remarkably smooth manner, resulting in years of intermarriages between the two ethnicities. Yet the Chinese aspect of this mixed cultural identity is beginning to fade in the city’s capital: Practices like baat-making and worship rituals face extinction, thanks to infrastructural redevelopment and a lack of successors to continue the trade.

Like Ban Baat, another of Bangkok’s oldest Chinese communities – Charoen Chai – may soon go, as plans to develop the railway line across the Chao Phraya river and Charoen Krung Road wipes out the historic Chinatown district, where the older generation of Thai Chinese buy joss papers and other items for traditional celebrations and rituals. During the New Year, the area’s temples, like Wat Mangkon Kamalawat and Wat Leng Noei Yi, are filled with worshippers intent on dispelling bad luck. And Charoen Chai specialises in Chinese food: streets upon streets of bakeries, dessert shops, and roadside stalls hawking the popular Jubkang noodles – a favourite for Chinese labourers in the olden days thanks to the massive portions and tiny price.

But all this may become a thing of the past once the railway plans for Bangkok begin in the coming years, and landlords start raising prices or making plans for redevelopment of the land. Facing insufficient support from the government, these communities and their uniquely Thai-Chinese practices have already begun to disappear from the places they’ve resided in for centuries – and once they go, there may be no return.