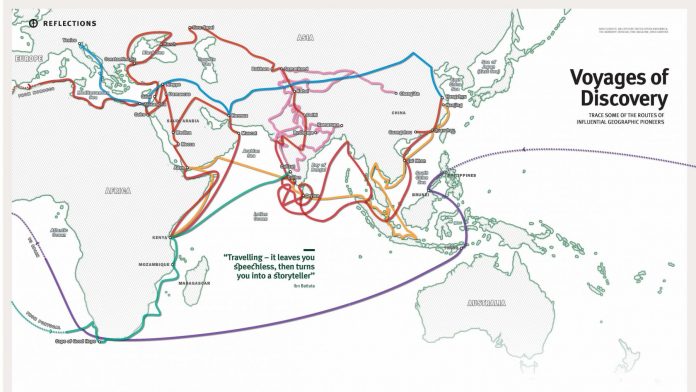 From Marco Polo, Vasco Da Gama to Zheng He, explorers have traversed the globe in search of discovery and adventure. Asian Geographic traces their journeys across the oceans in this explorers’ map.

The Venetian merchant travelled on the Silk Road – further than any of his predecessors. His journey to China lasted 24 years. He became a confidant of Kublai Khan

The Portuguese explorer ventured out of Lisbon to find a maritime route to the East. After successfully doing so, he subsequently made two other voyages to India

Magellan was the first European to cross the Pacific Ocean. In 1519, he set out from Spain with five ships to discover a western sea route to the Spice Islands

The Buddhist monk and pilgrim made a 17-year overland journey from China to India, where he translated Buddhist scriptures from Sanskrit into Chinese

He travelled more than anyone else in the Middle Ages. Over the course of three decades, he covered over 120,000 kilometres on foot, on horseback, and by boat

The Chinese admiral made seven journeys across the Indian Ocean and Western Pacific with the Treasure fleets, solidifying Chinese dominance over Asia in the 15th century

For the rest of this article (Asian Geographic Issue 3/2017 No. 125) and other stories, check out our past issues here or download digital copy here.