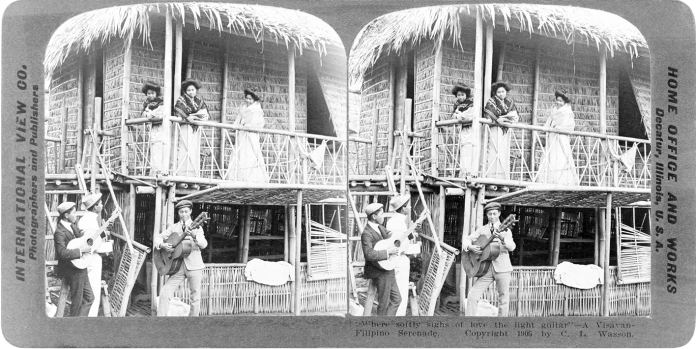 Under a courtship ritual called harana, it was compulsory for Filipino men to sing to their sweethearts

A typical courtship in modern Metro Manila might feature texting as much as any other smartphone-loving Asian city, but its older predecessor plays out much more like the romantic music videos today’s youth peruse eagerly on YouTube.

Still in practice a few generations ago, the Filipino ritual of harana takes its rhythm from Spanish habanera dance music, and its roots from the traditionally restrained response of a coy Filipina towards her beau.

In an undeniably passionate scene, a man will ready himself and his guitar at night under the bedroom window of the woman he desires, accompanied by a number of friends and professional musicians, called harananistas,
for support. Using a customary set of songs, the troubadour then serenades his ladylove for the entire neighbourhood to hear, bolstered
by his entourage.

The lyrics of typical harana songs use archaic Tagalog. Beginning with a gentle strumming of the guitar as a prelude to the oncoming nocturne, the man addresses the woman directly. Through his impassioned tunes, he may ask her if she is asleep, or appeal for her to look out of the window.

Should the window stay shut, the rejected suitor will leave, but if the object of his affections shows herself and listens to the ballad, she may either respond with a few lines of her own, or invite him into the house, where he then presents gifts to the family as a symbol of his matrimonial intentions. Despite his success, the suitor has yet to seal the deal –
it is not uncommon to require several rounds of harana to prove a supplicant’s persistence
to a discerning recipient.

Another occasion for the ritual is when women from other villages or cities visit, and men organise a harana session to catch a glimpse of the new arrivals and introduce themselves with chaste formality.

This vanishing “serenade of fervent love, tongue-tied of naivety”, as described in the poem Hoy, Pinoy, Bangon Na! (Hey, Filipino, Rise Up!) by Filipino poet and novelist Gumercindo Rafanan has been immortalised in its namesake, award-winning film Harana (2012), which garnered critical acclaim in the international film festival circuit. Based on the experiences of its Filipino director and cast, including acclaimed musician Florante Aguilar and septuagenarian harananistas Celestino Aniel, Romeo Bergunio and Felipe Alonzo, the meta-cinema piece asks society the same question it does of its protagonist: Will
harana vanish into tomorrow’s woefully
silent night?

Related: A Step Back in Time