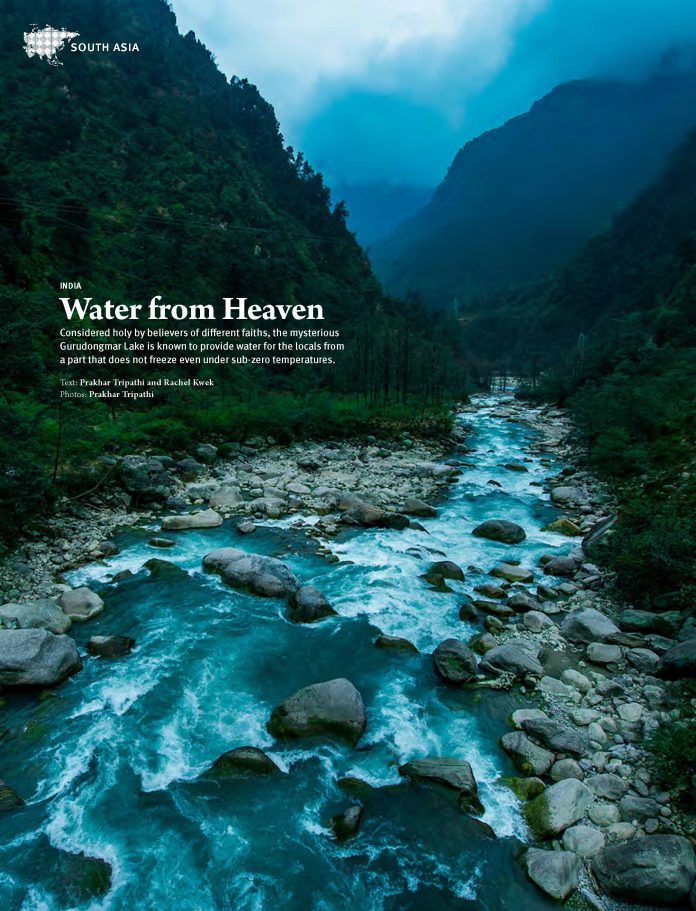 Considered holy by believers of different faiths, the mysterious Gurudongmar Lake is known to provide water for the locals from a part that does not freeze even under sub-zero temperatures.

Located at an altitude of 5,136 metres, Gurudongmar Lake is one of the highest lakes in the world. A part of this sacred lake remains unfrozen at sub-zero temperatures in the northeastern mountain ranges of India as howling winds pierce through the barren mountains. The Lepcha people, who are the original inhabitants of Sikkim, call it Nye-mae-el, which means ‘paradise’. Surrounded by snow-capped mountains, Gurudongmar offers breathtaking views of Mount Siniolchu (6,888m) and the world’s third tallest mountain, Mount Kangchenjunga (8,586m). The journey there takes pilgrims through lush green mountains and mesmerising waterfalls. The lake is one of the sources of the Teesta River, which flows through Sikkim, West Bengal and finally empties into the Bay of Bengal. Around 200,000 Sikhs pilgrimage to Gurudongmar Lake each year. Pilgrims drink the water from the lake as it is said to heal the worst of wounds and rid the body of impurities. Many of them bring the water back home to share it with their family members. Sometimes, pilgrims pray by the lake, toss coins into it and sprinkle water from the lake, believed to be holy, over themselves.

Named after Guru Dongmar, the lake has spiritual significance to Buddhists and Sikhs as well as Hindus. To Buddhists, Guru Dongmar refers to Padmasambhava, or Guru Rinpoche, the 8th-century founder of Tibetan Buddhism.

The original inhabitants of Gurudongmar who have been listening to the stories of their ancestors for decades tell us that Guru Dongmar, or Padmasambhava, touched and sanctified the lake. Local Tshering Bhutia said, “Padmasambhava is considered as an object of meditation. On his way back to India, he came across this lake and conducted rituals there as it looked so divine.” The lake used to remain frozen throughout winters, leaving the locals with no source of water, but it is believed that the guru placed his hands on a portion of the lake and it started melting miraculously. Thus, even in extreme winters, a part of the lake does not freeze, acting as an important source of water.

According to Sikh tradition, Guru Dongmar is associated with Guru Nanak, who founded Sikhism in the 15th century. Guru Nanak visited many of the places Guru Rinpoche had prayed at. It is said that the yak grazers of Gurudongmar not only appealed to Guru Nanak to provide them with water from the frozen lake but also sought his help with dwindling virility caused by the high altitude. At their request, Guru Nanak broke the upper layer of ice with his stick (also known as dang) and said, “The water of this lake will never freeze again. Whoever takes the water of this lake will gain virility and strength.” Since then, a portion of the lake doesn’t freeze during winter. To Sikhs, therefore, the lake’s name means “created with the guru’s stick”. His footprints, robe and a water-carrying utensil are preserved in a Buddhist monastery called Lachen Gompa nearby.

Dispute Over the Holy Ground

With the holy lake revered by Buddhists and Sikhs alike, both faiths have long staked a claim to a shrine built beside it. Believing that the lake is holy, an Indian army regiment of Sikhs started construction of a gurdwara — a place of worship for Sikhs that translates into ‘house of the guru’ — on its bank, at the India-China border in 1997 after demolishing an existing old stone structure, the Sangphur. The Sangphur was the place where the locals of this region have for centuries burnt incense and herbs in reverence and worship of Guru Rinpoche as well as the local deities that resided in the sacred lake and the surrounding mountains.

The Sikkimese people became furious at what they considered an illegal construction at the place that had been sanctified by Guru Nanak. In 1998, the Lachen Pipon — the elected head of the local community who is the equivalent of a village chief under the traditional adminstrative system of Lachen and Lachung called dzumsa — openly challenged the army’s claims that the Lachenpas (the people of Lachen) supported the construction. The Sikkim government got involved and formed a committee to investigate the dispute. The construction was halted by the Forest Department as the mandatory clearances had not been obtained from the Ministry of Environment, Forest and Climate Change. Local Buddhists claim the monastery was built by them and documents submitted by the Namgayal Institute of Tibetology proved that Sikkim is a Buddhist place of worship as claimed by the local people.

For the rest of this article (Asian Geographic Passport No. 133 Issue 5 2018/2019) and other stories, check out our past issues here or download digital copy here.