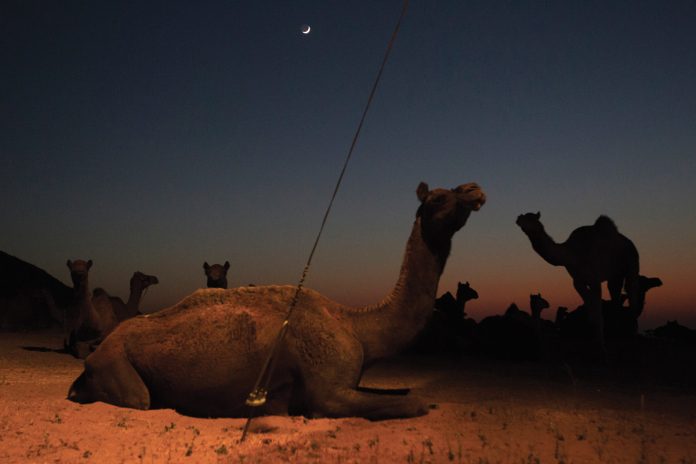 For the Rabari people in Rajasthan, camel trading is a way of life. Attending the Pushkar Camel Fair – the largest of its kind in the world – offers a window into this unique desert culture.

Every year at the time of the Kartik Purnima full moon in November, the sleepy Indian town of Pushkar comes roaring to life as the Pushkar Camel Fair – or Pushkar Camel Mela as it is known locally – rolls into town, as it has done for centuries. Billed as the largest camel fair in the world, it attracts an estimated 200,000 visitors each year – an eclectic mix of Hindu pilgrims, livestock traders and wide-eyed tourists, creating a carnival-like atmosphere where religion, tourism and commerce come together, yielding an enchanting and chaotic scene on the border of Rajasthan’s Thar Desert.

Camel keepers and up to 20,000 camels descend on the sand dunes surrounding the city prior to the fair to set up camp and mingle with traders, devising strategies to buy and sell their camels. Following the official opening of the fair, an itinerary of cultural activities and competitions are thrown into the mix. The atmosphere is hard to describe, but it’s something of a chaotic combination of a frenetic auction and fun fair – on steroids.

An emblem of India’s Rajasthan state, the camel symbolises love in local folklore, and owning one once signalled great status and wealth. The camel was used in warfare by the maharajahs, and played an important role in their desert communication, transportation and trade.

Although the fair may sometimes feel like nothing more than a gaudy carnival, a deeper look reveals the fascinating story and plight of the Rabari, a tribal group of Rajasthani camel keepers who were, historically, the guardians of the camel.

“My ancestors were responsible for transportation for the ruling princes. They relied on us and it was a great source of pride,” explains 53-year-old Hukuma Ram, who walked nine days with his 15 camels through the desert from a small village near Bikaner in northern Rajasthan to attend the fair. Ram has been coming to the fair for 20 years to buy and sell camels that he uses to help plough his fields. The camels also provide him and his family with milk, an important part of the Rabari diet and a highly nutritious source of vitamins and minerals that can sustain nomadic herders on long desert treks for weeks. “I love my camels like I love my son,” Ram confesses. “The camel has been a part of the Rabari family since the beginning of time.”

Stories passed down generations shine a light on the Rabari creation myth which reveals a fascinating connection with the camel, revealed in Rabari Myth of Origin, Census of Rajmarwar, published in 1896: “Shiva was meditating. Waiting for him to be finished and trying to pass the time, his consort, Parvati, started shaping animals out of clay. She created one particularly strange animal with five legs. Then, she asked Shiva to blow some life into it.

He refused, saying that such a misshaped animal would be beset by a host of problems. But Parvati persisted in begging him. Finally, Shiva gave in. He folded the fifth leg over the animal’s back and then said uth – get up! The camel got up and walked away. After some time, it started making a lot of trouble and creating a big nuisance. Parvati once again came to Shiva and asked for his help. She requested him to make a man that could look after the camel. Shiva then rolled a little bit of skin and dust from his arm and out of this he made the first Rabari.”

For a poor farmer like Ram, purchasing a camel can be a huge investment. Traders can be seen examining the health of camels, prying open their mouths to inspect their teeth, a telltale sign of good
(or bad) health. Negotiation on a price can be a long, arduous process with backwards and forwards haggling over the course of weeks. The going average price for a camel these days is approximately 30,000 INR (USD500).

India has the world’s third-largest camel population and camels tend to differ according to the region in which they’re found: Bikaneri camels sport long hair and tufted ears, whereas camels from Jaisalmer near the Pakistani border are long-legged and fast; those originating from Kutch are well known for their high milk yields.

Wandering around the fair grounds in the early morning and at dusk is the ideal time for taking photos, and for mingling with Rabari traders, all of whom sport colourful turbans as they sit on the dunes around campfires, sipping chai made frothy with camel milk, often smoking tobacco using traditional clay chillum pipes. Rabari women adorned in ornate jewellery and bright clothes circle the grounds collecting camel dung, which is then laid out to dry and later used as fuel for fires.

The sticky sweet smell of incense wafts over from the town and music from some of Rajasthan’s finest musicians fill the air with a rhythmic soundtrack befitting the occasion. When they’re not offering rides, the traders’ camels stand calmly by while they belch or pass gas – much to the amusement of children.

After strolling through the sea of camels on the dunes, travellers can then head to the stadium, where a daily programme keeps people entertained by showcasing cultural folk dances, musical performances, camel dancing, racing, and various contests, including the popular turban and moustache competitions.

Stalls set up on the grounds sell camel wool shawls, notebooks and paper made from camel dung. There’s camel cheese – and even cheesecake! With so much going on, the camel fair merits more than just a day or two to really appreciate all that it has to offer.

While the fair remains a festival of homage to Rajasthan’s renowned camels and their colourful caretakers, the Rabari’s way of life is becoming increasingly difficult as they lose access to the grazing lands that they have used for centuries on their seasonal migrations.

Over the past decade, the one-humped camel has experienced an estimated 50-percent decline in population. As a result, camel numbers have been down in recent years at the Pushkar Camel Fair, leading some to question whether the Rabari’s traditional way of life will survive through future generations.

Back on the sand dunes, as the week’s festivities are drawing to a close, Hukuma Ram confesses: “It’s hard work taking care of camels, especially nowadays.”

As children of the Rabari have increased contact with the modern world, many opt to go to school in cities, leaving the family tradition behind them. Camel trading is now at risk of fading away.

“Traders used to trade in a friendly manner. We all knew each other and were like a close knit family,” Ram explains. “After coming here for 20 years, I see the changes. Now, the fair feels more commercial and the sense of community is lost. Camel numbers are declining, but I’m still certain that the tradition will live on. It has to.”

Related: Games of the Great Khan

For more stories and photographs from this issue, see Asian Geographic Issue 128, 2017