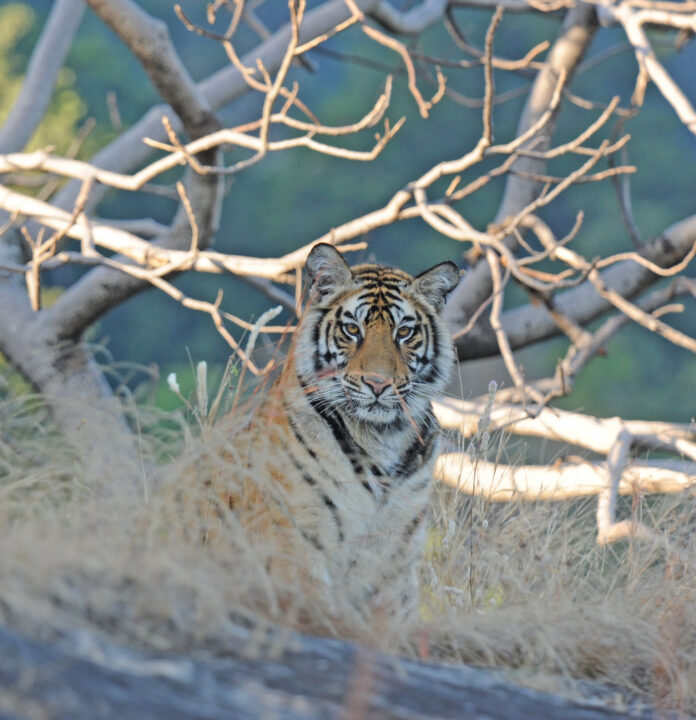 Text and images by Subhasish Chakraborty

This is where things stood in 1994, when a Time magazine cover shouted that the Tiger was “Doomed”, and U.S. Secretary of the Interior Bruce Babbit warned –“There may not be another chance to save Tigers”. This new crisis galvanised the conservation community. It became clear that saving the tiger was not a battle to be won once and forever, but a continual process of holding old threats in check and preventing new ones from emerging as conditions change.

India addressed this crisis with the 1994 formation of the Global Tiger Forum, an attempt to engage the international community in Tiger conservation. The U.S. Congress passed “The Rhinoceros and Tiger Conservation Act of 1994” to assist conservation programs in  nations with Rhino and Tiger populations. Conservation organisations, such as the World Wildlife Fund and the Wildlife Conservation Society, launched new programs and re-energized existing efforts devoted to Tigers. And new conservation organisations emerged, here and in Tiger range states, to help. Perhaps most important, in the last few years all of these various players have recognized the need for co-operation among themselves.

Where, a century ago, more than 80,000 Tigers roamed Asia, now, because of trophy hunting and habitat loss, fewer than 4,500 exist today. The newest threat is poaching. Since the rise of economic success and prosperity in Asia, the demand for traditional oriental “tonics” and “remedies” using the body parts of endangered species has skyrocketed. A live Tiger is precious and priceless, but a dead Tiger is worth $100,000. The Chinese revere the strength and power of the Tiger, but are “revering” the Tiger to death.

According to the Fall 1997 Western Canada Wilderness Committee newsletter, “China has hunted the South China Tiger from an estimated population of 4,000 in the 1960’s down to the pitiful 20 today”. Pressure has switched to the Bengal Tiger, whose numbers have dropped from 30,000 after World War II to less than 3,000 today. It is estimated that China is importing 300-400 poached Bengal Tigers a year from India and Korea another 200-300 from India and elsewhere. The situation is indeed alarming and the sooner remedial measures are found the better it is. The Tiger is a beautiful animal. But that is not the only reason we should save it. It is time to realise that when you save the Tiger, you save the forest and in turn secure your food and water security.

The Tiger cannot live in places where trees have vanished. In such places, the rain becomes a flood, killing people and destroying homes. It takes away the precious soil, leaving behind a wasteland. The soil jams up our lakes and dams, reducing their ability to store water. By destroying the Tiger’s home, we not only harm Tigers, but also ourselves.

This is a very simple, very direct link between saving Tigers and saving ourselves. The Tiger thus becomes the symbol for the protection of all species on our earth, from the tiniest mosquito to the largest Elephant, from birds and flowers to Crocodiles and frogs. This is why we sometimes call the Tiger an apex predator, an indicator of our ecosystem’s health.

When the British left India, it left behind a Forest Service which looked after the huge forest areas of India. Every politician of independent India made this service subservient to the Indian Administrative Service and the Indian Police Service. According to well known Tiger expert Valmik Thapar, As far as dedication and commitment by forest officers to protection is concerned, they require a political clout, the political assurance that someone is interested in them. That is going to happen only when there is a dedicated Ministry and a dedicated Police force.

Project Tiger was launched in 1972, the brain child of the Ministry of Environment and Forest. This Project survived and was successful as Indira Gandhi and Dr.Karan Singh spearheaded it because and truly believed in the importance of India’s forests and Tigers. Their political clout was unchallenged. If something happened in a National Park or to a Tiger, there would be a flurry of phone calls from the Prime Minister or Cabinet Minister.

Today, however, we see that the Project has little to no power over state governments. The Project is like a bank, in that it disperses money and this is the extent of it, it appears. Money is allocated from the Planning Commission and given to Project Tiger to disperse. At the moment, it goes to the 27 Project Tiger Reserves. The Director of Project Tiger is supposed to pass cheques after looking at the proposal from the states. He can advise but he has no powers. According to Valmik Thapar, “Project Tiger needs to be reformed and restructured in the 21st century”.

A lot of organisations and well meaning people have come forward and are working dedicatedly to save the big cats. Consider the case of Anthony Marr, a Canadian who is working with WCWC and a grant from CIDA. Marr is helping Kanha National Park in India to safeguard its Tiger Reserve. In a land where women must walk several kilometers to collect firewood, 90,000 villagers living in the buffer zone surrounding this park eye its potential fuel and grazing land with envy. “The park is like a feast laid out on a table surrounded by hungry people who are forbidden to touch”, says Marr. The solution? Look after the people so that they will look after the Tigers. Partnered with Tiger Trust India, the project is setting up free medical clinics and schools, building community bio-gas plants to show a practical alternative to firewood and developing training and education programs for Park guides and visitors, as well as village teachers, students and their families. “The result will be more than just a change in local people’s attitudes towards the Tiger and the park. It will include a vhanged, more sustainable way of life”. Even in areas of prey abundance, the Tiger has to work hard for its food since all its prey species have highly evolved systems of self-preservation which the Tiger must beat. The regulates, the hoofed herbivores which constitute the main food of the Tiger, have a highly developed sense of smell and reasonably keen senses of sight and sound.

Whether living singly (as a Sambhar does) or in herds (like the Chital, Nilgai and Gaur), they are constantly vigilant as they move, forage or rest. Herd security and leadership is provided by the matriarchs who keep a close watch while the herd is foraging or resting. They constantly shift their muzzle to face the breeze in order to catch scents and funnel their ears in different directions to catch sounds. On apprehension of danger, the first alarm is signaled by stamping a forefoot. If on further assessment, the danger seems real and imminent, a vocal alarm is sounded. Finally, the matriarch provides the lead and the herd drifts, scampers or bolts.

It is true that there are many problems facing India’s forests. Rampant poaching and a lack of a dedicated protection force are the main obstacles. Saving the Tiger involves making difficult decisions. Decisions we have been putting of for 20 years. It also means abolishing Timber and other forest product exploitation from critical Tiger habitats.

It may be a dream, but I hope some day India will have an exclusive service fashioned after the United States Fish & Wildlife Service. This is a formidable force supported by a fleet of vehicles including helicopters for patrolling. They have all the necessary surveillance equipment, weaponry and most important, the fund to support their activities.

If we act rationally and deploy our resources wisely, there is still time to save the Tiger.