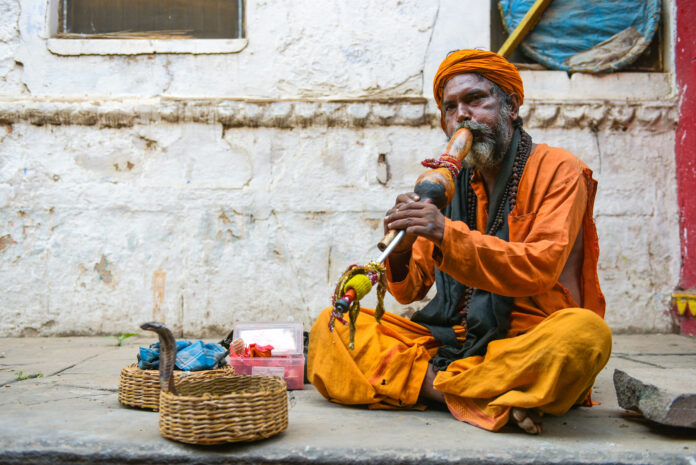 Snakes may be responsible for tens of thousands of deaths across India each year, but this fearsome reptile is a powerful symbol in the region’s religions.

Snakes have been milked for their venom for centuries. Frenchman Léon Charles Albert Calmette (1863–1933) created the world’s first anti-venom for snake bites in 1894.

The immunologist developed antibody-based anti-venom by injecting snake venom into horses. The work revolutionised the treatment of bites from these poisonous predators, yet snakes have maintained their fearsome reputation and remain powerful symbols of malice in many religions.

In the Bible, it was a serpent who tempted Eve to take a bite of the fruit from the forbidden tree. The Medusa of Greek mythology, a gorgon with serpents for hair, turned to stone anyone who dared to look into her eyes. Similarly, from J.K. Rowling’s Harry Potter series slithered Nagini, a malicious serpent and right hand to the main antagonist, Lord Voldemort.

With popular culture and religions giving snakes negative connotations, it’s easy to overlook the fact that some belief systems view snakes in a positive light. They are seen as powerful entities and deemed the rightful protectors of mortals and gods. In Hinduism, Buddhism, Jainism, and Sikhism, the naga is a semi divine deity that is half human and half serpent. Nagas have concretely established themselves in these religious philosophies and legends.

In Hinduism, the significance of the serpent, known as the naga, is highlighted through its association with the Trimurti, the trinity of supreme divinity personified by Brahma the creator, Vishnu the preserver, and Shiva the destroyer. The three- headed naga represents this triad of gods and is known as the guardian of wealth.

The nagas are said to have established themselves in the netherworld, known as Patala or Naga Loka, the realm of the nagas. Associated with water, they reside in lakes, ponds, seas, and even wells. While this race of semi divine creatures goes by the umbrella term naga, female nagas are known as nagi, nagin or nagini.

Nagas are widely depicted in the Hindu epic, Mahabharata. The two notable nagas mentioned in the texts are Shesha and Vasuki. Shesha acted as a bed for Vishnu, upon which the world he created lies. Vasuki, which rests on Shiva’s neck, was used as a rope to churn the Ocean of Milk, one of the central events in the constant battle between the devas (deities) and the asuras (demigods).

Animals sacred to Hinduism are associated with many rituals and festivals. Naga Panchami is one such major festival where devotees celebrate snake deities and worship live snakes. Also known as Naga Puja, this auspicious event sees offerings in the form of milk, sweets, and even sacrifices put before live snakes. It is held on the fifth day of the month of Shravana, between July and August.

The symbolism of snakes is ambiguous in Hinduism. On the one hand, snakes can be seen as symbols of desire (kama). On the other, they can be seen as bearers of misfortune. In the real world, snake bite is a very common cause of accidental death in livestock, especially in rural India. Their presence is bad luck for farmers, who depend on cattle for their livelihoods. On the spiritual side, Kundalini, literally “coiled snake”, is the divine feminine energy resting at the base of the spine. It may also be illustrated as a pair of serpents intertwined around each other as they ascend the spine.

Through tantric practice, this energy is believed to be awakened, leading to spiritual liberation. The initially coiled snake gradually climbs up the seven chakras, the focal points used in traditional meditation practices. It begins at the lowest, the Muladhara chakra, all the way up to the Ajna chakra. The energy is exposed as the snake reaches the highest chakra, when the person experiences pure bliss. In depictions of the Kundalini serpent, it is usually coiled upon itself three-and-a-half times. The number three represents the states of consciousness, while the half is representative of the higher consciousness, which must be awakened in order to commune with the divine.

The nagas also play an important role in Buddhist belief, and religious texts narrate the serpentine deities with high regard. Many depictions of Gautam Buddha, the founder of Buddhism, have seven snakes looming behind his head. The origin of this iconography lies in the legendary tale of the Buddha and Mucalinda, the naga king. According to the story, after the Buddha began meditating under the Bodhi Tree, the sky grew gradually darker for seven days as a fierce storm approached. However, Mucalinda emerged from below the ground and with the aid of his enormous cobra hood and seven heads, shielded the Buddha from the pelting rain. As the Buddha attained enlightenment, the storm cleared and the serpent king assumed human form as a youth.

According to Buddhist cosmology, the Four Heavenly Kings serve Sakra, the ruler of the Trayastrimsa Heaven. The kings – Virupaksa, Dhrtarastra, Vaisravana, and Virudhaka – are guardians of each of the four directions, watching over the mortals. The western king, Virupaksa, is the rightful leader of the nagas. In Buddhism, the nagas are also loyal protectors of Mount Sumeru, the sacred five-peaked mountain at the centre of the physical, metaphysical, and spiritual universes in Buddhist, Hindu, and Jain cosmology. The nagas protect the devas from attack by the asuras.

Important figures in Buddhism are often depicted as nagas, reflecting their magical or supernatural gifts. These include Nagarjuna, an Indian Mahayana Buddhist philosopher and thinker; Dignaga, one of the Buddhist founders of Indian logic; and Nagasena, a Sarvastivadan Buddhist sage.

While nagas are particularly important in Hinduism and Buddhism, they are also a feature of one of the world’s oldest religions, Jainism, another ancient belief system from India. Central to Jainism are the spiritual ideas of the 24 Tirthankaras, the supreme preachers of Dharma, otherwise referred to as the “teaching gods”.

Of these, the first, 23rd and 24th Tirthankaras – Rishabhanatha, Parshvanatha, and Mahavira, respectively – are considered the most prominent. The legends linked to Parshvanatha emphasise his association with nagas. For instance, before his birth, Parshvanatha’s mother, Queen Vamadevi, is said to have seen a black snake crawling by her husband’s side, and saved King Ashvasena from the serpent. Idols depicting Parshvanatha typically portray the Tirthankara under a canopy of snake hoods, usually featuring seven snake heads. On some statues, the nagas essentially function as a crown.

The similarities between the common depictions of the Buddha and Parshvanatha are obvious, but the legends behind them do differ. The seven-headed naga-king Mucalinda protected the Buddha from a storm as he was meditating. In the Jain scripture, Kalpa Sutra, Parshvanatha once saved a snake that had been trapped in a log. Later, the serpent, reborn as Dharana, lord of the underworld kingdom of nagas, sheltered Parshvanatha from a storm sent by a demon.

The significance of the nagas in the Dharmic mythologies of Hinduism, Buddhism and Jainism can’t be overstated, but one thing is certain: The ambiguous nature of these divine serpents only adds to the mystery surrounding these half- human half-snake beings. Pick up your copy here!