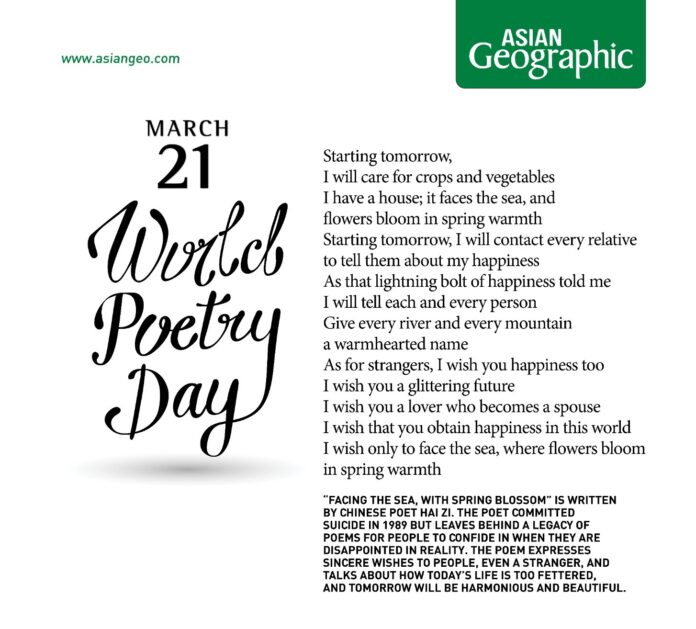 Every year on March 21, World Poetry Day celebrates humanity’s most prized forms of artistic expression of culture and identity. The art of poetry brings humanity and its shared values together, promoting linguistic diversity and supporting endangered languages. Since 1999, World Poetry Day honours poets, literature traditions, and ultimately, the visibility of poetry in media.

ASIAN Geographic Magazine reignites the love for poetry in every issue with themed pieces of literature. Here are some of our favourites from the recent issues:

Forecasting the Fate: A Wuxing Poem by Yuan Changming Water (born in a year ending in 2 or 3)
– helps wood but hinders fire; helped by metal but hindered by earth
with her transparent tenderness
coded with colourless violence
she is always ready to support
or sink the powerful boat
sailing south

Wood (born in a year ending in 4 or 5)
– helps wood but hinders earth; helped by water but hindered by metal
rings in rings have been opened or broken
like echoes that roll from home to home
each containing fragments of green
trying to tell their tales
from the forest’s depths

Fire (born in a year ending in 6 or 7)
– helps earth but hinders metal; helped by wood but hindered by water
your soft power bursting from your ribcage
as enthusiastic as a phoenix is supposed to be
when you fly your lipless kisses
you reach out your hearts
until they are all broken

Earth (born in a year ending in 8 or 9)
– helps metal but hinders water; helped by fire but hindered by wood
I think not; therefore, I am not
what I am, but I have a colour
the skin my heart wears inside out
tattooed intricately
with footprints of history

Metal (born in a year ending in 0 or 1)
– helps water but hinders wood; helped by earth but hindered by fire
he used to be totally dull-coloured
because he came from the earth’s inside
now he has become a super-conductor
for cold words, hot pictures and light itself
all being transmitted through his throat

Yuan Changming grew up in rural China and started to learn the English alphabet in Shanghai at age 19. He now lives in Vancouver, Canada, where he co-edits Poetry Pacific with Allen Qing Yuan, whilst also writing all kinds of poetry, receiving numerous awards and nominations for his work. Democracy will not come
Today, this year
Nor ever
Through compromise and fear.

I have as much right
As the other fellow has
To stand
On my two feet
And own the land.

I tire so of hearing people say,
Let things take their course.
Tomorrow is another day.
I do not need my freedom when I’m dead.
I cannot live on tomorrow’s bread.

Freedom
Is a strong seed
Planted
In a great need.

I live here, too.
I want freedom
Just as you

Langston Hughes (1901–1967) was an American poet, social activist, novelist, playwright, and columnist. He was one of the early inventors of the literary form called jazz poetry. Hughes is best known for his work during the Harlem Renaissance.

In the very earliest time,
when both people and animals lived on earth
a person could become an animal if he wanted to
and an animal could become a human being
Sometimes they were people
and sometimes animals
and there was no difference.
All spoke the same language.
That was the time when words were like magic.
The human mind had mysterious powers.
A word spoken by chance
might have strange consequences.
It would suddenly come alive
and what people wanted to happen could happen –
all you had to do what say it.
Nobody could explain this:
That’s the way it was

Nalungiaq, an Inuit woman, reported that she learned the song “Magic Words” from an elderly uncle named Unaraluk, a shaman. The song was first written down by Danish explorer Knud Rasmussen. Rasmussen, who was part Inuit and spoke the Inuit language. He collected many Netsilik legends and tales in the desire to learn about the unique view such an isolated people had developed of their world and the universe. Poet Edward Field translated many of these stories. I walked over the dark bridge
and into a city I
did not know.
I pointed to the shadow
on the wall and was
given my black wings.

He drew the fish
and placed it
under my breast
and worked for three hours
until I passed out
and then worked for another hour.
He told me the story of the koi
and the dragon and the pearl
and left it in three colours
on my body.

I got a green star.
Green because it is
a Mardi Gras color.
Behind my ankle
because I wanted
it to make me fly—
so that when I run
I’ll lift off from
the ordinary ground.
And mostly I do.

Laura A. Goldstein‘s first collection of poetry, loaded arc, was released by Trembling Pillow Press in 2013, and her second collection, awesome camera, was published by Make Now Press in 2014. She has also published six chapbooks as well as numerous poems and essays in magazines in print and online.

Goodbye, Goldeneye by May Swenson Rags of black plastic, shred of a kite
caught on the telephone cable above the bay
has twisted in the wind all winter, summer, fall.

Leaves of birch and maple, brown paws of the oak
have all let go but this. Shiny black Mylar
on stem strong as fishline, the busted kite string

whipped around the wire and knotted—how long
will it clind there? Through another spring?
Long barge nudged up channel by a snorting tug,

its blunt front aproned with rot-black tires—
what is being hauled in slime-green drums?
The herring gulls that used to fee their young

on the shore—puffy, wide-beaked babies standing
spraddle-legged and crying—are not there this year.
Instead, steam shovel, bulldozer, cement mixer

barrels of garbage for water rats to pick through.
So, goodbye, goldeneye, and grebe and scaup and loon.
Goodbye, morning walks beside the tide tinkling

snowy egret. And, goodbye, of faithful pair of
swans that used to glide—god and goddess
shapes of purity—over the wide water.

May Swenson (1913–1989) was an American poet and playwright. Born in Logan, Utah, to Swedish parents, she was educated in Utah before moving to New York in the 1930s. She taught and served as poet-in-residence at many prestigious institutions in both the US and Canada. Swenson was also a Chancellor of the Academy of American Poets from 1980–1989.

The last poem is featured in Asian Geographic 06/2021, coming to the shelves soon. Reserve your copy by emailing marketing@asiangeo.com. 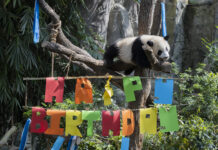