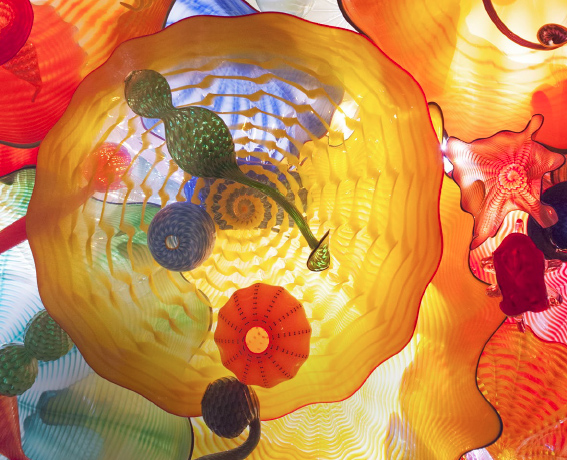 MOST PEOPLE can agree that grass is green, the sky is blue and that ladybirds are red and black. What colour, though, is birdsong? Do the days of the week have colours? In what colour and shade do you see love, anxiety or betrayal? Most people look blank when asked such questions, but a select few can give you an immediate answer. They suffer – or, some might say, are gifted with – chromaesthesia, a condition in which any sound heard is linked with a very specific colour.

Chromaesthesia is a particular variant of synaesthesia, a neurological condition in which the stimulation of a cognitive pathway leads to the involuntary stimulation of a second, otherwise unconnected neural pathway. The word comes from the Greek syn (meaning “together”) and aisthēsis (meaning “sensation”).

It is a relatively common condition, occurring in as many as one in 23 people, and more than 60 different forms have been documented. They cover all five senses. Ordered sequences, such as numbers or letters, might have personality traits; numbers and letters might have specific colours; and for those with sound-colour synaesthesia (chromaesthesia), every sound, from an E flat played on a piano, to the incessant barking of a dog, has its own particular hue. The colour associated with a sound may be determined by pitch, timbre and volume and it varies from person to person: while a blast on a whistle may be grass-green for one, another person may see it in lavender, or even in crimson red.

The use of functional neuroimaging has enabled neuroscientists to identify which parts of the brain are activated during a synesthetic experience: researchers see “crosstalk” between parts of the brain associated with different senses. It has been hypothesised that babies are born with their senses wired together; as they grow, the pathways separate out and the crosstalk becomes inhibited. In synaesthetes, this separation never occurs and so they continue to experience more than one sense at a time. The challenge to this theory comes from the fact that although synaesthesia does often run in families (suggesting that it is a genetic trait), it has also been recorded in patients after brain trauma caused by strokes, epileptic seizures and drug use.

It appears that the ability to utilise more than one sense simultaneously enhances memory skills (by increasing the proportion of the brain in use at any one time) and creativity. It is estimated that one in eight synaesthetes work in the arts, often achieving great success: classical composers Nikolai Rimsky-Korsakov, Jean Sibelius, Franz Liszt, Olivier Messiaen and Leonard Bernstein are all known to have been chromesthesic, as was the legendary jazz musician Duke Ellington. The artist David Hockney and the author Vladimir Nabokov are also notable synaesthetes.

Our improved understanding of chromaesthesia in recent years has inspired a groundbreaking step in the treatment of colour blindness. British composer and contemporary artist Neil Harbisson was born with achromatopsia, a visual condition that manifests itself as total colour blindness: Harbisson sees the world around him entirely in shades of grey. In 2004, he became the world’s first wearer of an eyeborg, a head-mounted third eye that is designed to allow people to perceive colour through sound waves. The eyeborg detects the colour frequency of an object, turns it into a sound frequency based on a sonochromatic musical scale, and passes it to a microchip at the back of Harbisson’s head. The sound waves are then conducted through the skull to the inner ear, enabling him to “hear” the colour.

Check out the rest of this article in our lastest issue of Asian Geographic No.98 Issue 5/2013 here or download a digital copy here