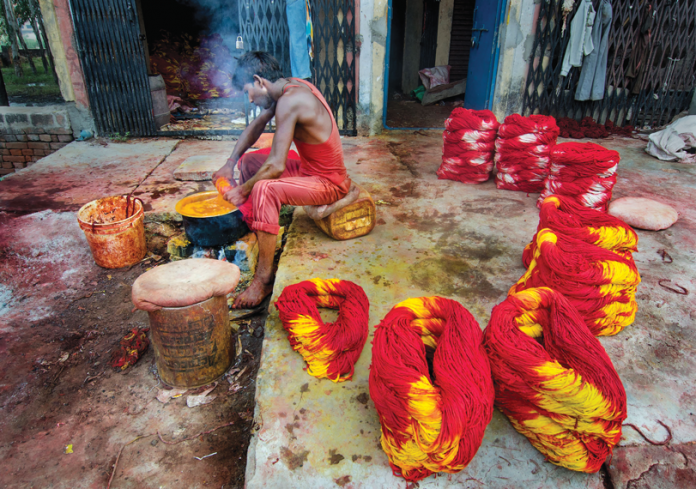 Strands of red and yellow thread sway in the wind as they dry on clotheslines along the roadside. Qur’anic verses blare over speakers. Muslim artisans are hard at work, knee-deep
in buckets of dyeing chemicals – sans protective gear.

For generations, the families of Khanjahanpur and Alhaadganj – two villages near the town of Lalgopalganj in the Indian state of Uttar Pradesh – have been making kalava, an object intimately familiar with the wrists of thousands of Hindus across India and Nepal. Also called raksha or mauli, this nondescript thread bracelet is tied for devotees during religious ceremonies, and counted among the holiest of talismans. First mentioned in the Hindu epic Mahabharata, the bracelet is thought to give its wearer pure thoughts, long life and protection against
their enemies.

Kalava-making is a family effort, and in many cases the only source of income for villagers. Everything is done by hand, and everyone chips in, even children. Dyeing begins before daybreak, and only late in the evening – over 12 hours later – are the sun-dried threads stored for the night. One batch takes up to six days to make, in a method passed down through the generations.

Lalgopalganj’s kalavas are shipped out and offered at temples across India and Nepal. Production is a year-round affair, although the month before the nine-day-long Navratri festival in autumn is when demand peaks. Though no one knows for sure how two remote villages came to be at the centre of a kalava enterprise, it’s something that temples in the nearby holy city of Allahabad – which sees some of the largest pilgrimages on Earth – surely give thanks for.

Related: More Than A Meal Ticket