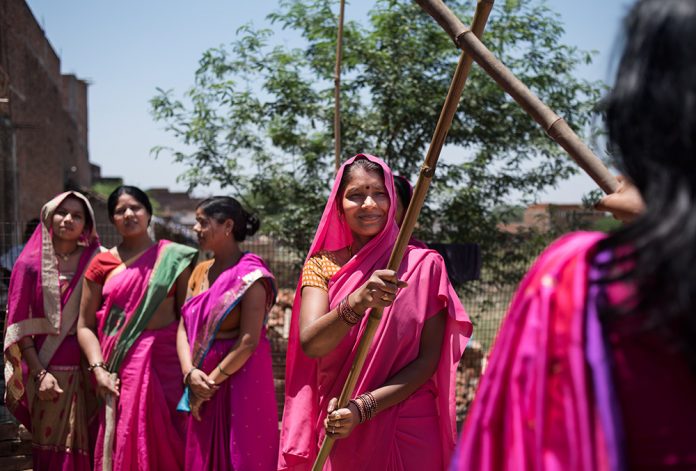 They wear pink saris, wield sticks and don’t hesitate to use violence in their fight for women’s rights. These are the ladies of the Gulabi Gang, an association created by Sampat Pal Devi to eradicate gender violence in India, one of the countries in the world where women are often discriminated against even before birth.

According to shocking official statistics from 2013, in India, a woman is abducted every 10 minutes and one is raped every 20 minutes. In response to such a dire reality, the Gulabi Gang, an association of 400,000 women, has become the bane of rapists, abusers, and corrupt policemen.

Janki Devi’s relationship with the man she fell in love with was never easy. She was only 15 when she met Anand Kumar, a 20-something to whom a few months later she lost her virginity, but both sets of parents opposed the union outright.

Not surprisingly, in rural areas of the Indian state of Uttar Pradesh, as is common across the country in varying degrees, romantic relationships are a matter arranged between two families regardless of feelings. They become a mathematical operation where caste, economic status and political relations between the two clans are considered. Love, they say, comes with time and routine.

For Janki and Anand that equation did not yield its desired result, so their parents demanded that they cease the relationship and stop seeing each other. Against their parents’ wishes, the couple decided to marry in secret. Thus, as tradition dictates, Janki finally moved into the home of her in-laws in 2006. And so began another nightmare for her. For unknown reasons, because she was never allowed to access medical tests, she was unable to conceive a child.

So, on 23 February 2015, Anand’s parents doused her with gasoline and set her on fire. Neighbours still managed to take her to the hospital as she hung by the thread of her life, but Janki Devi died that very same night. Despite the complaint lodged by her parents, the police did not carry out any investigation and no media showed interest in her story.

Janki is only one out of more than 300,000 women each year who suffer from different forms of gender violence in India, a country where, according to official statistics from 2013, a woman is abducted every 10 minutes and one is raped every 20 minutes. And these figures still fail to reflect the country’s situation in all its cruelty, because, as Doreen Reddy, Women Sector Director for the Rural Development Trust explains, “For every case reported there is at least another one who has suffered in silence”.

In fact, according to a government survey conducted between 2005 and 2006, 51% of men – and, surprisingly, 55% of women – justify domestic violence in some form or another based on these excuses; the disrespecting of in-laws, the postponing of housework and arguing with the husband. And it doesn’t only happen in poor rural areas – in February 2014, the Supreme Court of India ratified that rape within marriage is legal.

Many also believe that an infertile woman is akin to a useless animal, and some, including those who killed Janki, even feel entitled to take matters into their own hands.

But her father, Dinesh Prasad Panday, believes there is no justification for murdering a woman. So, after months of unsuccessfully trying to get the police to prosecute Anand’s family, who belong to a higher caste and have contacts among local government officials, he has decided to seek justice in another way: he has taken the case to the headquarters of the Gulabi Gang, located in the small town of Badausa.

Created in 2006, this association in which about 400,000 women spread across the country are already a part of has become the terror of rapists, abusers and corrupt policemen – all because its founder, Sampat Pal Devi, is not a woman to be messed with.

“I don’t advocate violence, but there are times when that is the only way to fight. There are people with whom words and arguments are simply not enough,” she stresses, pointing to the photo of Janki.

That is why those who join the ranks of the Gulabi Gang wear a distinctive uniform that is now instantly recognisable; the pink sari, India’s traditional dress. With the 500 rupees annual fee, members also get a stick to carry around at all times.

“It is intended to protect us, but also to threaten and, if necessary, to beat up the abusers,” says Pal. The latter is true, for in 2002 Pal found a man beating a woman in the street and decided to intervene. But she was quickly abused, too, so the following day, she managed to convince five other women from her village to beat him back. Her strategy yielded good results then and hasn’t changed much since.

The Only Way to See Change

Every day, Pal gets several cases like Janki’s, and with most of them she is unable to contain her anger. After all, she knows well what the pain suffered by these women feels like. Pal herself was the daughter of poor peasants, and she was forced to marry a 25-year-old man soon after her first period.

“I was taken out of school when I didn’t yet know how to read and write, and I became a slave in the house of my in-laws”, she recalls. Three years later, at the age of 15, she gave birth to the first of her five children, who she delivered in a row, “one every year”.

But her strong character trumped the difficulty of the situation and she made her in-laws respect her. Soon, she found out what she really wanted to do in life.

“I became interested in the work of groups who said they were seeking women’s liberation. But I realised that they could not meet any of their goals. People laughed at them,” she recounts. “I know my position seems very radical, but sometimes the stick is the only way to achieve change.”

Despite her unorthodox and vigilante methods, those of which attract the most attention, Pal has also tailored more traditional programmes to move beyond the specific cases that land at her feet daily, in order to achieve a greater impact in the community.

“Society will only change if we eliminate the inherent subordination of the role given to women. And this is a revolution that has to come from us. Therefore, besides having established self-help and legal counselling groups to address individual cases, we focus also on programmes to achieve their freedom, from savings funds to events with companies where women can be hired,” she says.

Sampat Pal Devi’s goals are very clear and ambitious. She says, “We want to eradicate child marriage and the dowry tradition, act firmly against domestic violence and promote the empowerment of women through education and social awareness.”

“Many argue that those are rights already protected by our Constitution, but the problem doesn’t lie with the law, thank goodness, but with its implementation. We live in a violent patriarchy that permeates all institutions, especially the police and politicians at the highest level. If we women don’t save ourselves, nobody will,” she concludes.

Zigor Aldama is an award-winning journalist based in Shanghai, China, where he works as correspondent for Vocento, Spain’s largest media group. He has been covering social issues in the Far East since 1999 and the Indian suicide crisis since 2013.

Miguel Candela is a Spanish photographer currently based in Hong Kong. He specialises in social features across Asia and uses photography to capture the present as a historical memento. Miguel won Best New Talent at the 2012 Prix de la Photographie (Px3) Paris competition.

For more stories and photographs, download a copy of Asian Geographic No. 118 Issue 3/2016 here!