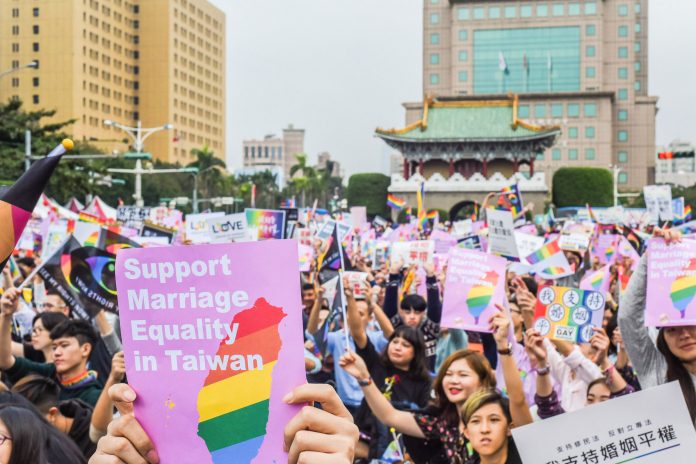 Taiwan, one of Asia’s most forward looking territories for the LGBTQ community, might see 157 same-sex marriages registered on May 24 after the Constitutional Court ruled that same-sex unions must be legally implemented by May 24 following the entering of “The Enforcement Act of Judicial Yuan (司法院the judicial branch of Taiwan) Interpretation No. 748” (more commonly known as the “Same-Sex Marriage Bill”) into Legislative Yuan’s (立法院the unicameral legislature of Taiwan) agenda on March 5. The government had drafted a same-sex marriage bill in February and passed it in parliament.

On the day that the Constitutional Court has ruled it legal for same-sex marriages to be registered, a total of 157 same-sex couples plan to get married at household registration offices all across Taiwan. A government statement released in December 2018 stated that almost 4,000 gay couples had registered to marry.

The Constitutional Court of Taiwan had ruled unconstitutional the prohibition of same-sex marriage in the civil code in May 2017 and given the relevant authorities two years to amend or enact laws in accordance with the court’s Interpretation No. 748. The deadline is May 24 2019.

In a referendum in November last year, Taiwanese voters had opposed marriage equality and defined marriage as between a man and a woman and requested for a special law to be enacted for same-sex unions. The referendum posed the question: “Do you agree that the Civil Code marriage regulations should be used to guarantee the rights of same-sex couples to get married?” 6,949,697 voters answered no to the question while 3,382,286 answered in the affirmative. Although there is uncertainty over how Taiwan’s legislature will reconcile the different civil groups on opposite ends of the issue, the legislature voted in March 5 to send the “Interpretation No. 748” to a second reading.

However, to appease the majority of the voters who opposed same sex marriages in the referendum, a separate bill, “The Enforcement Act of Referendum No. 12”, which limits the use of the words “marriage” and “spouse” was sent to a second reading too. Referendum No.12 asked, “Do you agree to types of unions, other than those stated in the marriage regulations in the Civil Code, to protect the rights of same-sex couples who live together permanently?”

In Taiwan, for bills to become laws, they have to pass second and third readings by the full legislature first. Both bills run counter to each other as the Enforcement Act of Referendum No.12 preserves the use of “marriage” and “spouse” for heterosexual couples. It remains to be seen if both bills will pass into law and what will happen then.