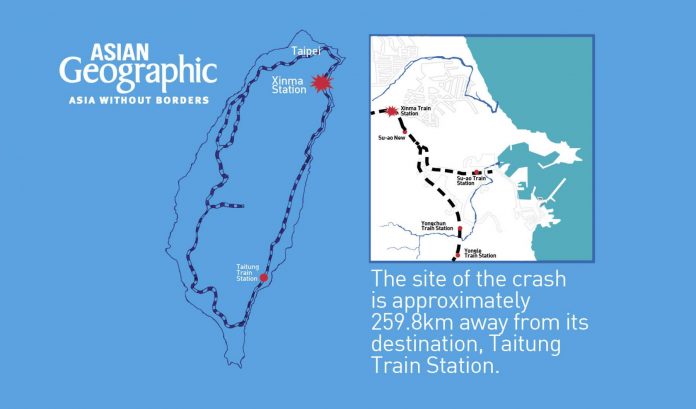 18 were killed and at least 187 were injured when all eight carriages of a Puyuma Express bound for Taitung derailed at 4.50pm Taiwan time on Sunday, 21st October. The worst in 27 years, the accident happened near Xinma Train Station in Yilan, a county in northeastern Taiwan. 366 passengers were on board when five of the carriages flipped onto their sides.

In 1991, 30 were killed and 112 were injured after two trains collided in Miaoli. According to a Taiwanese source, a Puyuma Express train had also derailed when travelling from Taitung to New Taipei at around 4.25pm on 24th October last year. Despite the uncanny similarities between the two incidents, a stark contrast remains: all 300 passengers on board the Puyuma escaped unscathed.

President Tsai Ing-wen has pushed for a swift probe into the cause of the major tragedy.

The Puyuma Express is an electric multiple-unit passenger train that has a maximum speed of 130km/h.

Manufactured in 2012, it is one of the newest of the 13 models owned by the train company. Chief Secretary of TRA Chu Lai-shun said at a press conference yesterday that the driver of the train reported an air compressor problem shortly before the accident. Chu said that insufficient power and deceleration are possible outcomes of an air compressor failure but it is unlikely to cause a derailment. Contrary to this depiction, a traffic recorder reported that the train was travelling at 140km/h, shedding light on what could be a critical factor in the cause of the accident.

In a move to acknowledge responsibility for the tragedy, Taiwan Railways Director Lu Chieh-shen tendered his resignation yesterday but according to Taiwan News, Minister of Transportation and Communications Wu Hong-mo has “insisted that Lu first manage emergency repairs, take care of the passengers and ensure that the railway returns to normal operations within three days before he would consider his resignation”.