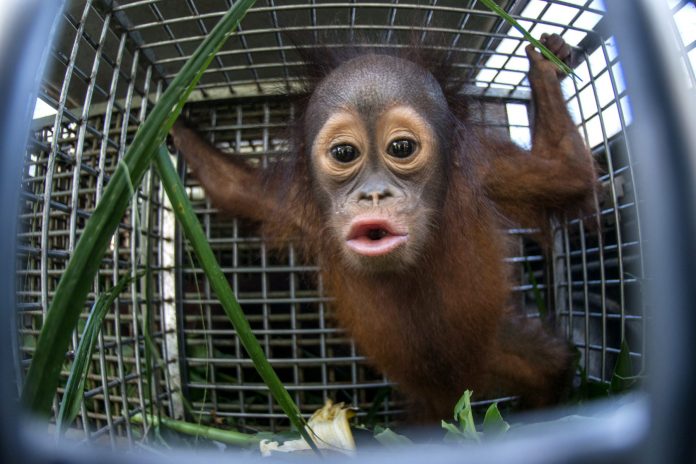 The baby orangutan grabs his mother’s limp body, shaking it with both hands, before taking off. We follow at full speed, aware of the need to catch him by hand – darting an animal this young could kill it. Just as he dashes up a nearby tree, Dr Laura Benedict grabs him by the legs. The orangutan – eyes bulging in terror, mouth stretched to capacity – begins to scream; terrible, brain-piercing shrieks.

Dr Benedict asks me to take over as she prepares the sedative. I grab the orangutan under his arms and struggle to contain the terrified, writhing ape, just about keeping his sharp canines away from Dr Benedict, as she administers the injection. “It’s OK darling, it’s OK, it’s OK,” reassures the vet, rubbing his belly as the drugs take hold.

We place the wilting infant back where he belongs: with his mother. I sit alone, trying to make sense of what just happened, as the apes are loaded onto a van. Dr Benedict makes a call to her colleagues at the Orangutan Rehabilitation Centre in Sepilok to let them know the news: two more are on their way.

A visit to modern-day Borneo – once little more than a thick rainforest duvet, home to a Noah’s Ark-esque collection of animals and a smattering of tribes – throws up a few surprises. It is easier to find McDonald’s than it is macaques, Crocs are mostly found on peoples’ feet, and your “Welcome to the Jungle” may be from Axl Rose at karaoke.

Over the last 50 years, Borneo’s population has doubled to around 19 million people. In its largest cities, rapid development has paved the way for high-rise apartments, five-star hotels, shopping malls, and rows of bars and restaurants. Travel a little further afield and rural areas swell with people, properties and production. Add 222 species of mammals, 420 types of birds and 15,000 plant species to the picture and you have all the ingredients needed for human–animal conflict. With more mouths to feed, even the most exotic animal finds itself on the menu. The friendlier creatures are kept in cages, or traded on the black market as exotic pets. Other animal species are targeted for their body parts.

In January 2016, a sun bear was spotted by tourists floating down the Kinabatangan River, its paws and gall bladder removed for use in the traditional medicine trade. Pangolins – docile mammals that look a little like armadillos – are hunted for their scales, meat and even foetuses, making them the most trafficked animal on the planet.

If they’re not being eaten or traded, the many species are losing their homes. Up until 1975, nearly 75 percent of Borneo was forest. Today, that figure stands at just over 50 percent. Half of the world’s annual tropical timber acquisition now comes from Borneo, and the stripped land is then used for pulp, rubber and palm oil plantations.

Palm oil is one of the most efficient and versatile vegetable oils on the market. Harvested all year round, its trees produce more fruit per hectare than sunflower, soya or rapeseed oil. As a result, the industry is now estimated to be worth USD47 billion annually – and 85 percent of it comes from Indonesia and Malaysia.

Palm oil plantations in Borneo are also a leading cause of human–wildlife conflict, as extensive deforestation occurs to produce them. Controversy surrounding the industry is rarely far from the headlines.

In 2015, as many as 127,000 fires raged across Indonesian Borneo, as land was cleared for plantations. Images of skeletal orangutans being rescued to backdrops of smouldering forests played out to a global audience; tangible, chilling snapshots of desecrated modern-day rainforests.

We have learned that it is not just the animals who are dying, but humans, too. A Harvard and Columbia University study estimated as many as 100,000 people lost their lives to the thick and deadly smog that engulfed land as far away as Singapore and Peninsular Malaysia, which are located over 1,000 kilometres from the burn sites.

It also turns out that El Niño and climate change helped fan the flames, providing these fires with the ideal conditions to burn and burn. It is the ultimate double whammy: Global warming increases the risk of fire spreading, which in turn contributes to more climate change.

Forests of the future

As they are chopped down – at an estimated rate of around five billion trees per year – carbon dioxide and other gases are released into the atmosphere. When, for example, one hectare of peatland forest is drained for palm oil production, it is thought that 3,750 to 5,400 tons of carbon dioxide is expelled over the course of 25 years. In fact, scientists now believe that up to one-tenth of greenhouse gases released are due to the clearing of forests and peatlands.

The result is violent shifts in weather systems. Surveys of villagers in Kalimantan revealed that floods are becoming far more frequent, particularly in watersheds with more extensive palm oil plantations. Between 2010 and 2013, as many as 1.5 million people were displaced due to these floods.

These changing systems spell bad news for orangutans, too. A study by the United Nations Environment Programme (UNEP) in 2014 claims that as much as 69 percent of their remaining habitat may be unsuitable by 2080, with an overall reduction of suitable habitat of around 15 percent by the end of the century. Fluctuating rainfall patterns affect the availability of food sources and negatively impact the flowering stages of fruit. And when food is in scant supply, females are less likely to conceive.

It is a bleak picture for the island’s most famous primate, which the International Union for Conservation of Nature (IUCN) upgraded to “critically endangered” in July 2016, due to populations of Pongo pygmaeus falling by more than 60 percent between 1950 and 2010.

So how long do we have before they become extinct? “I doubt we’ll see orangutans in the wild by 2050, the situation is that serious,” says head of the Wildlife Rescue Unit (WRU), straight-talking Dr Sen Nathan, who has seen his fair share of human–animal conflict. Formed in 2010, this team of local vets and rangers rescue, rehabilitate and relocate animals around Sabah, the northern state Malaysian Borneo.

Dr Sen is also the reason I am currently in a truck, driving two drugged-up orangutans to a safer environment. Having spent much of 2015 documenting Borneo’s underwater world as presenter of the Web series, Borneo from Below, I have been invited by Dr Sen to join up with the WRU and see some of the challenges they face. My usual work with coral and sharks a distant dream, I could never have anticipated just how difficult this year would be.

During this period, I’ve seen the WRU perform medical checks on 20 confiscated pangolins, capture and relocate numerous elephants from plantations, patch up all manner of exotic birds and reptiles, rescue crocodiles attracted to urban sewage systems, rehabilitate sun bears, apprehend poachers and smugglers, and much, much more.

“Working for the WRU is perhaps the greatest challenge of my life, but I love what I do. I could never imagine being a vet in Kuala Lumpur, tending to cats and dogs. I’d go insane – and miss the action!” Dr Benedict shares, laughing.

Back at the centre, the malnourished orangutans undergo extensive medical tests to ensure that they’re disease-free and can be re-released into the wild. A couple of months later, they are given a final once-over and identifying tattoos, before we drive them to a suitable release spot.

We let the baby go first, and he quickly scarpers up the nearest tree. Next up is the mother, who also disappears high up into the canopy. And then there’s a short anxious wait for them to rejoin one another. Will she reject her young after their recent trauma?

Happily, the baby clambers towards his mother, reattaches himself, and the pair take off, hopefully to live in peace, and never to be seen by the unit again.

For more stories and photographs from the issue, see Asian Geographic Issue 123, 2017