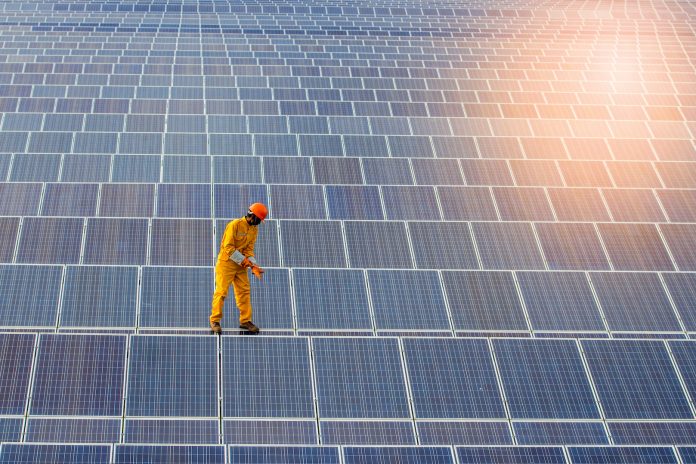 The sheer scale the new solar power facility in Kamuthi, Tamil Nadu in southern India is astonishing —images show a vast sea of reflective blue panels covering an area of 10 square kilometres. This mass of 2.5 million solar units – forming the largest solar power plant in a single site, taking the spot from the Topaz Solar Farm in the US – has a capacity of 648 megawatts. The plant was built in merely eight months, constructed by the Adani Group to the value of USD679 million, according to Al Jazeera. In comparison, Topaz’ construction took two years and footed a bill of USD2.5 billion. During construction, around 8,500 men installed an average of 11 megawatts-worth of equipment every day.

The unveiling of the solar plant could not have been more timely, with India suffering its worst pollution in 17 years earlier the same month. The development has been hailed as a game changer by environmental groups.

The developing country’s heavy reliance on coal is still strong, despite big ambitions to grow their renewable energy resources. The government has assured that renewable energy projects will generate 60 percent of the nation’s electricity by 2030, although that seems over-ambitious; at present, 80 percent of India’s electricity output is generated by fossil fuels. Moreover, India’s coal output is actually increasing, with concerns that it may double by 2020.

Despite these obvious challenges, the government’s intention is for solar energy to power 60 million homes by 2022 as part of the national goal to produce 40 percent of their power from non-fossil fuels. At full capacity, the new plant in Kamuthi is estimated to produce enough electricity to power about 150,000 homes.

According to a statement by research group Bridge to India, the new plant has edged India’s total installed solar capacity across the impressive 10 gigawatt threshold. Owing to the completion of this massive plant, India is anticipated to become a leader in the solar market, falling third in the solar energy output rankings in 2017, after China and the US. The government aims to quadruple current global solar power to 1 terawatt by 2030. There are plans in place to build even larger solar farms in Andhra Pradesh.

This article can be found in Issue 123. Revisions were made by Rachel Kwek.