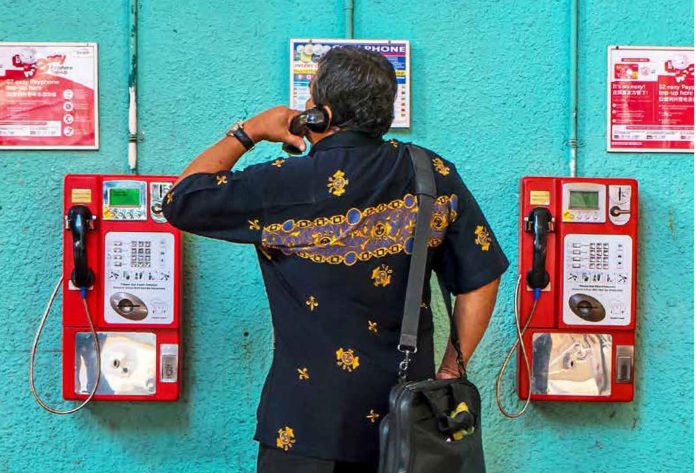 With the advent of mobile phones, public payphones have fallen by the wayside. We take a look back at how they have evolved with us through the years.

Thomas Doolittle reportedly created what could be considered the first payphone by placing a telephone in Bridgeport and another in BlackRock, Connecticut in wooden booths and connecting them using a telegraph wire.

The first phone booth known as a telephone cabinet was patented. The space measured 1.2 by 1.5 metres and had a desk inside and wheels attached to enable movement.

American William Gray invented the coin-operated payphone. It was post-pay system, so users paid after they made their calls.

A mechanisam to return deposited coins when calls are not made successfully was developed.

The first public phone kiosk, the K1, was introduced in the UK. The iconic red colour wasn’t applied until 1924 with the K2. The classic red telephone box is the smaller 1935 K6 design.

The British colonial government formed Singapore Telephone Board (renamed Singtel as we know it today), which provided the first public payphones to Singapore residents.

The Singapore Telephone Board introduced the Coinafon, an iconic squarish orange coin-operated payphone that used to be found commonly at coffee and provision shops.

1995: Telecoms installed its first card phone in Singapore in a one-year trial to gauge public acceptance.

For all things mobile, check out the rest of this article in our upcoming special issue on the Mobile Phone (Asian Geographic No.135 Issue 2/2019 ) or you can also check out our past issues here or download a digital copy here