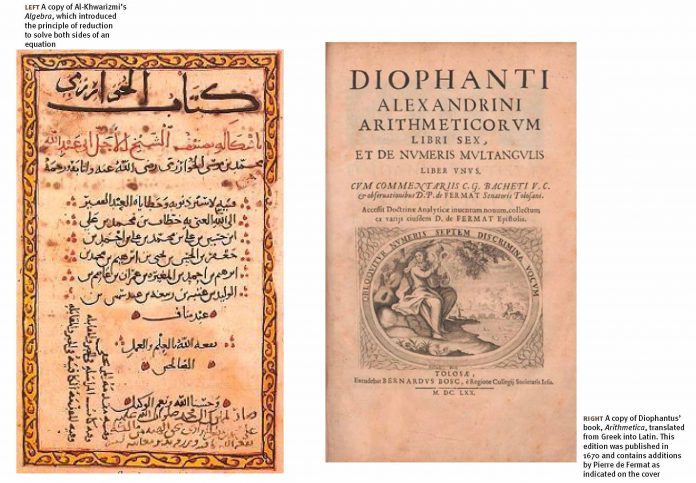 Two Founding Fathers of Algebra That Changed the Mathematical World

The origins of algebra might have started in ancient Egypt and Babylon, but the modern scientific world has these two foundational figures to thank for.

Muhammad ibn Musa Al-Khwarizmi, known in short as Al-Khwarizmi was a Persian mathematician who lent his name to the modern English word algebra.

Considered to be the foundational text of modern algebra, it was so notable that it eventually found its way to Europe and was translated into Latin in the 12th century.

It was taken from the title of his book, Al-Kitab al-mukhtasar fi hisab al-jabr wa’al muqalaba (The Compendious Book on Calculation by Completion and Balancing) written in 825 AD. Al-jabr comes from the Arabic word jabara, which means to reunite and restore.

Al-Khwarizmi lived in the 9th century during the period of the Islamic Golden Age. He was a scholar in the House of Wisdom in Baghdad, an intellectual centre which gathered and translated the world’s knowledge into Arabic.

In his book, Al-Khwarizmi introduced the fundamental algebraic method of reduction for solving both sides of an equation. In particular, he simplified all equations to six standard forms of solution using squares (“x2”), roots (“x”) and numbers.

Dubbed the ‘The Father of Algebra’, Diophantus was an ancient Greek mathematician who flourished in
the third century and was one of the first mathematicians to introduce symbolism into algebra. He was also perhaps the first to recognise fractions as numbers in their own right.

Diophantus belonged to the Silver Age of Alexandria and studied at the University of Alexandria in Egypt. His major contribution to mathematics was a collection of 13 books called Arithmetica, in which only six have survived throughout the centuries. A collection of approximately 150 problems, the books give numerical solutions of both determinate (equations with only one solution) and indeterminate equations (equations with more than one solution).

The Diophantine equation was named after him, which are equations to which only integer (whole number) solutions are sought. Perhaps one of his most famous equations in contemporary mathematics is xn + yn = zn where if n=2, its positive integer solutions are 3,4,5 and 5,12,13 as in the case of right-angled triangles.

Check out the rest of this article in Asian Geographic No.115 Issue 6/2015 here or download a digital copy here