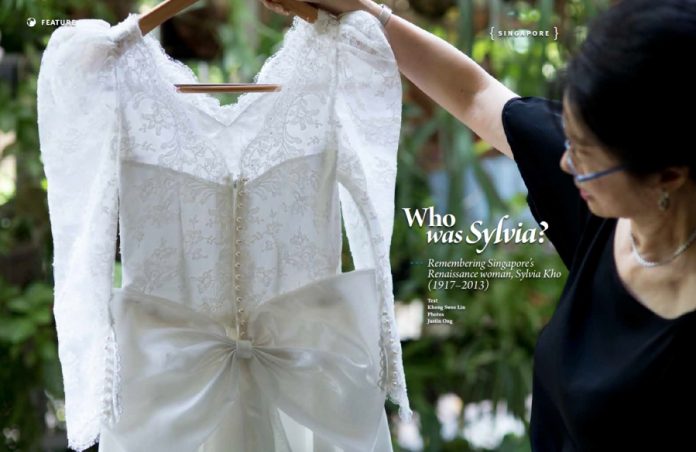 Singapore’s renaissance woman, Sylvia Kho (1917–2013) was an innovator and entrepreneur in the arts of fashion, beauty and decoration. Learn more about her amazing life.

At the invitation of local rulers, Hakka and Cantonese miners migrated to the mountain ranges of the Malayan Peninsula in pursuit of tin ore. Under the British, Kanching became a tin mining and commercial centre, and also the seat of the Cantonese secret society, Ghee Hin Kongsi, whose name meant “the rise of righteousness”. Within this extraordinary setting, unfettered unions unfurled, free from familial constraints and traditions.

Hakka tin miner and rubber planter Wong Yat Hin didn’t conform in seeking a bride from his native South China. He had, however, one unusual criterion – that his future wife be literate (obviously he needed someone to keep his books). She would subsequently act as his interpreter, conducting negotiations on his behalf to secure a dredge for his mine in Kanching.

Enter Chia Kim Siew, a Teochew Peranakan girl and a teacher who lived in Singapore’s St Margaret’s School, one of the few girls educated in English. The headmistress thought Kim Siew was of marriageable age and thus indulged in judicious matchmaking, pairing her with Wong.

Needlework in her blood

Women of the Chinese Peranakan community (which developed out of early liaisons between Hokkien traders and the indigenous women of the Malay archipelago since the late 14th century or so), were generally considered to be excellent housekeepers, who ruled their households with an iron fist.

Presenting three heirs and eight heiresses to the Wong family, Kim Siew ruled the roost in Kanching. All the girls were given daily sewing and beadwork lessons. The fifth daughter Sien Moy, or “Sylvia”, could draft from an early age, cut and sew a pattern: This impressed her needlework teacher to such an extent that she was asked to teach her peers upon attending school in later years. She also sewed Peranakan-style bed accessories for the nuptials of her father’s estate workers.

Their mother ensured that there was a time to play and work, and a time to pray. Her Christian beliefs, firmly instilled in her children from a very early age, shaped their characters and formed the cornerstone of Sylvia’s ventures. The girls briefly attended Selangor’s and subsequently Singapore’s Methodist Girls’ Schools.

During the Depression, the family moved to Senai, Johor, and they managed to attend school in Singapore where Sylvia ably looked after her sisters. Her entrepreneurial streak had begun to surface as she utilised her skills and love for sewing to support her siblings. Handmade Chinese-style “frog” buttons sold for two cents each. “Special” ones cost $5 each! She could sew Peranakan-style slippers for men and women or embroider cushion covers.

7 December 1941 marked not only the catastrophe of Pearl Harbour, but also the landing of Japanese forces on Kota Bahru, Kelantan, on Malaya’s east coast. The next day, the first bombs fell on Singapore, causing 61 deaths and over 700 injured. Sylvia, who then trained as a nurse at the General Hospital, came face to face with the horrors of war.

In these circumstances, as Sylvia’s family were in the then Malaya, going back was not an option. Along with the brave medical and non-medical staff, she soldiered on whilst artillery shells fell in the hospital vicinity. Many of her friends were killed. Yet Sylvia was desperate to join her fiancé Kho Hock Chiao in the Dutch East Indies, (now the Republic of Indonesia), and tried to get a passage on the last vessel out. As she nervously queued up at the ticket office, an elderly English lady in the queue fainted. Nobody helped her. Stepping forward to assist and revive her, she lost her place in the queue. One man refused to let her back in as she was Chinese. Yet her kind act did not go unnoticed and a staff member quietly handed her a ticket.

Afraid that she might not make it to the harbour in time to board the vessel, she panicked as air raid sirens began to sound and bombs began to drop. Then seemingly out of nowhere, a British officer drove up and offered to escort her safely on board, straight to the Captain.

That night, the vessel was shelled by Japanese warplanes and began to sink. The Captain asked his passengers to pray. Amazingly, the boat limped on for five days, and even as provisions and water ran out, they survived./ Arriving in Djakarta (as it was then spelt), she met people who helped her get accommodation and transportation to her fiancé’s family in Semarang. After he marriage, her time in Semarang was well-spent learning dressmaking, cookery, hairdressing, cake decoration and other craft from Indo-Dutch teachers, setting the tone for future endeavours.

Yet the end of the Japanese occupation of the Dutch East Indies brought about a period of instability before the formation of the Republic of Indonesia. As Sylvia was then a British Subject, she was eventually compelled to leave. While en route to the airport, standing along with three others in the back of a truck, they came under attack from a hail of bullets. They managed to make it to the airport, where the driver, a British officer, told her that her life had been spared by God, and that he saw bullets flying by her and not hitting her.

Now back in post-war Singapore, Sylvia offered brides exquisite guipure and chantilly lace, ethereal tulles and the smoothest satins. Nobody had ever seen or felt such materials. The secrets of creating exclusive wedding gowns were gleaned from extensive study and buying trips to the UK, France, The Netherlands and the USA. French lace manufacturers feted her, providing limousine services on the tarmac upon her arrival in France. Her purchases of lace pieces manufactured on small handlooms were veritable works of art, each pattern now no longer available.

Ever the consummate artist, she brought perfection to her craft by going not one but hundreds of steps further. The luxurious laces she acquired were not simply transferred onto gowns – each motif was individually cut out and repositioned on the gown she was working on, and then ornamented with seed pearls or other decoration.

She introduced flexible stiffeners, then unavailable locally, for that full skirted “can can” effect needed in wedding dresses. (Her competitors used cane inserts which popped open if extra weight was added to the garment by way of a train).

The move towards a stronger Occidental influence in attire had begun. Every article she produced bore the “Sylvia Kho” mark of quality. Besides gowns, brides wore veils and headdresses, the last either imported or stitched personally by Sylvia. While her gowns have been showcased, her bridal accessories were in a class of their own. Hand-stitched headdresses of guipure lace flowers reflect her Peranakan training and heritage in their utmost delicacy, fine stitch work and liveliness.

To complement the whole outfit, Sylvia offered makeup and beauty classes and services, hairstyling and even made wax-flowers for headdresses. Never one to do things by halves, she opened bridal, hair and beauty boutiques around town in Tiong Bahru, then Tanglin Shopping Centre and thereafter Orchard Towers, after initially working from her tiny bedroom in Tiong Bahru, where she simply transferred her baby from bed to floor, laid a plank on her bed and started to cut gowns.

Although helped by a team of seamstresses later, she personally cut every gown and attended fittings. Susan her niece, reminisced that her aunt had cut her wedding veil freehand, in a flash. Such was her expertise.

Sylvia’s creativity knew no bounds. Thinking out of the box, she realised that adornment extended beyond the bridal pair to their carriage, so she placed bridal dolls on wedding cars, now a practice taken for granted. Quickly spotting opportunities, she provided gowns for rent for budget brides. As she put it simply, “There was a need…”

Her clients evidently agreed. They straddled every stratum of society from VIPs to politicians and royalty… to the girl next door. Her daughter Sophie recalled that if a bride faced financial problems, Sylvia would waive the cost of the gown or accessories.

Perhaps the most beautiful aspect of Sylvia was the ability to help anyone – customers, friends, her staff or even strangers. Her businesses not only made brides beautiful (as her tagline proclaimed), they were her vehicles for healing relationships and changing lives, thanks to her deep love and concern for people. Her counsel, indeed, went beyond the dress.