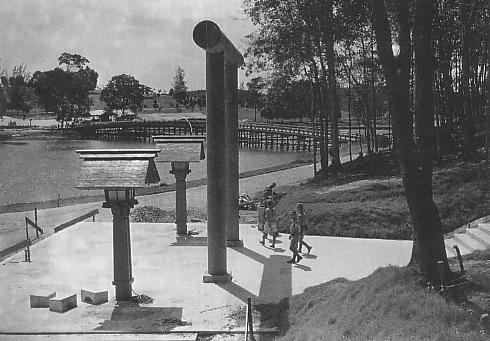 Two months after the fall of Singapore on the 15th of February 1942, the victorious Japanese began building a Shinto shrine in the forests of the western part of MacRitchie Reservoir, near Sime Road.

However, they did not construct it themselves – it was built on the backs of 20,000 British and Australian prisoners of war (POWs) between 1942 and 1943 – forced to labour in scenes of humiliation and defeat.

The commander of the Japanese 5th Division’s Engineers Regiment, Major Yasuji Tamura, oversaw the project. He envisioned a magnificent Shinto shrine – a spiritual bastion in the southern regions of the “Empire of the Rising Sun”. In fact, he held such high hopes that in due time, it would be eclipsed only by the Meiji Jinja in Tokyo, Japan. The plan was to fell the surrounding forest in order to create a 1,000-acre park, within which they would create gardens, playgrounds, a swimming pool, wrestling arenas and other facilities. Such were his hopes that it was considered a possible location for the Far Eastern Olympic Games.

The shrine, which was completed exactly a year after Singapore’s fall, was called the Syonan Jinja (the Light of the South Shrine), dedicated to the sun goddess Amaterasu Omikami, whom the Emperor is said to be a descendant of. It was built on the slope of a hill, arising from the waters edge, and had to be accessed via the long and stunningly crafted “Divine Bridge”. Nearby, the Japanese erected a memorial on Bukit Batok Hill called the Syonan Chureito, which commemorated the Japanese soldiers who fell during the conquest of Malaya and Sumatra. This hill was significant as it overlooked the old Ford Motor Factory along Upper Bukit Timah Road – the place where General Arthur Percival capitulated to the Japanese. Five hundred Australian POWs were forced to work every day until the memorial was completed.

The shrine and the memorial were a focal point of religious rituals, where the Japanese gathered to worship their God-Emperor, as well as the spirits of their fallen. It was also a significant statement of the Japanese empire’s superiority. The local people were forced to attend public ceremonies at Syonan Jinja in order to show their loyalty and submission. They were also expected to worship the goddess, who was declared the “Eternal Protector of Malaya and Sumatra”.

Out of fear that the British forces would desecrate it, the Japanese purified the shrine by fire (an acceptable practice in the Shinto religion) before they surrendered. There is little left of it today: Some of the foundations, granite walls, a retaining wall, a stairway, among others. In 2002, the shrine was declared a Historic Site by the National Heritage Board, although it is in a core Nature conservation area and so remains inaccessible to the public.